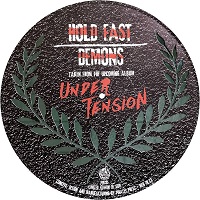 Albums this short are hard to review. When you only have two tracks to dig your teeth into, it can be hard for the music to make a big impact on you. In this case the two tracks are a taste of what is to come in the later album, ‘Under Tension’. So, is an album that had so few tracks worth it? I think you will find that it is quite worth it and the biggest problem is that you will want more.

The guitar work is fantastic. The tone they have dialed in has the perfect amount of breakup and complements the mix wonderfully. The drums are not overbearing at all as sometimes happens in this gene. The vocals are totally on point as well. I do prefer the more upbeat vocal style in ‘Demons’ over the darker tone in ‘Hold Fast’ however both are great.

The second track, ‘Demons’, is one of my favorite tracks that I have heard in a long time. It is something we all can relate too. We all have some demons inside that we bury in one way or another. Sometimes you just need to take time off from the demons and have some fun. The song captures that well while still being a great track to listen to when cruising down the highway with the windows down.

The first track, ‘Hold Fast’, is also a great track but was not quite to the same level in my mind as ‘Demons’ it is a little more repetitive and takes a little bit of a darker tone. It is however also a great track that really opens the album well. It just does not feel as whimsical and the other and has a darker vocal style. I am probably downplaying it more than I should. It is a fantastic track that deserves to be checked out on its own but with the second track being so good this one gets an undeserving short end of the stick.

So, are two tracks really worth it? I wholeheartedly say yes. Even though they will be a part of the full album later? I still say yes. This will be a limited-edition release of 500 units and the tracks are great. I think it is worth it both for the music and for the collectability. These are must-have tracks. I don’t think you will be disappointed.