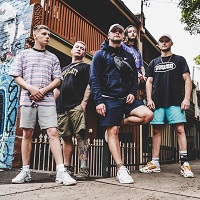 Sheffield hardcore/metal crossover crew Malevolence have been producing some of the nastiest riffs and breakdowns on the UK scene in recent years. Taking influence from bands such as Crowbar, Lamb of God and Hatebreed, in quite a crowded market, this quintet make their mark with resilient energy, and threading pure dirt into each and every song.

They are preparing to take things to the next level with the release, at the end of this coming week, of their new EP, ‘The Other Side’, which is three tracks of pure filth which I predicted in my recent review is going to stomp all over the UK hardcore scene. With plans to support the release with live shows on indefinite hold, I took the chance to grab a (virtual) chat with vocalist Alex Taylor, and started by asking them what prompted them to take the step of releasing the EP on their own label, MLVLTD Music…

So, we wanted to self-release this record, just because we have wanted to for a little while now, and with it being a three track EP it seemed the right time. We wanted to release a body of work to keep things moving, keep the hype and keep people interested. Self-releasing for a short body of work just seemed like the right choice to make. The two previous albums before, we have been under labels; we just felt this time it gave us a much better understanding of the process of putting out a record. We just wanted to give it a go ourselves and try to keep things in house – we have always been a very DIY band. We like having complete control over the creative and writing process, as well as the business side of it. So, it just seemed the natural choice to make. We already had Malevolent Records set up, Charlie our drummer set that up to distribute the last ‘Desolated’ record and ‘Rough Justice’ record. So, we already kind of had the framework in place to do it ourselves.

Doing this EP under your own label, was there any sort of differences or challenges that arose during the process?

Yeah. I mean it was a new avenue that we haven’t really explored yet, so there were certain fences to jump over and certain challenges. Even coming down to how the vinyls are made, the vinyl sleeves and the CD booklets. It was just little things that we didn’t necessarily think about previously. In the end it turned out to give us a lot more control over how the final product came out. So there were a few minor hiccups, but nothing too unexpected. What we have done with the previous record labels, we always have had a very hands-on approach anyway, we like being involved in that side, so we already had an idea of what to expect.

Looking at your past history, you guys seem to take your time to produce new music. With doing it under your own label, with new added challenges – Did it take longer than expected to produce and release?

The main thing with Malevolence that takes the time is the actual song writing process, we are a very picky band. We like to put in a lot of effort, a lot of thought goes into the song writing. When it came down to actually writing the songs, we knew that we wanted to just do like a short, three track EP because whilst we were working on the next album. We knew that we are never going to be one of those bands that can churn out an album every year, or every two years. Also, we are aware in the current music industry you have to keep putting that music out to keep people interested. So, the song writing process took the longest; bringing it all together and getting it mix and mastered and getting the artwork together – that was quite quick. Especially when it came to filming the videos; all three of them were filmed over the space of three months. All that side of the process was quite smooth and quick. We like to spend the time to make sure we are 100 per cent happy with the music before we start going down the route of getting it all finished.

Noticing that you have released two of the tracks already, was that always the plan to release those first? Or did you ever consider keeping the EP closed and releasing it all as one product?

Originally, we had a first plan, which was to release the title track first, then we just switched our plans around. We always knew we wanted to drip feed it and spread it out over a period of months. So, the title track was meant to be released first, but this was before we had a video for ‘Keep Your Distance’ – which had Bryan on it. As soon as we had that video, we were just like you know let’s change the plans around a little bit; this is when we decided to drop the one with Bryan [Garris] on first. Now looking back on it, I think we made the right decision because the title track with it being  such a different track from the rest of the EP, it will leave a lasting memory and strong talking point for the future.

Talking of Bryan Garris, from Knocked Loose, what made you choose him in particular?

We already knew we wanted just one guest feature on this EP, with it being a short body of work. I’ve always wanted to have Bryan on because he has such a unique voice, that high pitched scream that he does- you instantly know who it is as soon as you hear it. It just came together pretty naturally really, we have been friends with the guys in Knocked Loose since 2016, I think they came out to some of our shows in the US, we met them there and since then we have kept in contact. We have done quite a few tours together, we did a big tour with them just before the new year. We get along really well and Bryan just seemed like the obvious natural choice. I think the part he was on, is quite suited to his style, it gives an unique element to the song.

The upcoming EP, is that going to link in with the new album you’re working on, or is it something separate?

I’d say it’s more of a side piece, we are already writing for the next album; we have been for the past 10 months or so. I wouldn’t say it is something that will lead into it, but it will still be Malevolence, it’s still showing the progression in terms of the production and sound of the band. The EP was a chance for us to push our boundaries and push us out of our comfort zone.

In terms of creating new merchandise, do you base it off your own styles or what is current in the scene?

It is probably a bit of both – Wilkie our bass player and Charlie, they handle the merchandise side. A lot of it is what we would like to wear ourselves. It needs to appeal to a large audience as well. A lot of effort goes into coming up with cool ideas; on this campaign we have done some gold necklaces. We spent a lot of time designing them, and they were part of one of the pre-order packages.

When you aren’t busy with touring (as the moment), or the music related side – what do you all usually get up to?

Pretty much all of Malevolence work. I work in security – often when I’m not on tour, I’m at work. Same with the other lads, they all have jobs they do. We try to get together as much as we can, to try and be in the same room when we are writing. Obviously, we live in Sheffield, so there are plenty of opportunities to go out in the countryside for nice walks and stuff. Generally, just hang out and see friends. I like being in a band that doesn’t tour 12 months out of the year, to actually have a life back home where it’s not always music.

Has there been a band that you haven’t yet had the chance to support or tour with, that you would like to?

Oof, yeah. I would like to go on tour with a big metal band like Lamb Of God; they are probably one of our favourite bands collectively. We have played some shows with them, but we have never toured with them. Hatebreed – that would be another one. Yeah, that is quite a tough one actually. Those two are probably the ones that jump out at me the most because they are our favourite bands.

And finally, as a band, is performing at festivals something you like to do? Is there anything about the UK festival scene that you would change or adapt (once the circuit gets up and running again)?

We don’t get a lot of attention from UK festivals. We have played Download twice, but that is kind of it, in terms of mainstream metal festivals. A thing I would change is probably be them booking us *laughs*. There are some good festivals there: they just need to book us *laughs* – and we will turn up and cause some carnage.