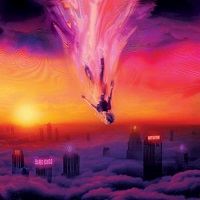 Regular ÜR readers should need no initiation (sic) into the dystopian world of Canadian punk/metal crossover crüe Sumo Cyco, as they have been melding and pushing generic boundaries for the best part of a decade now – as well as nearly killing our very own beloved Dark Queen on their last visit to our adopted hometown of Belfast some two-and-a-half years back… but, hey, we’re not ones to hold grudges, especially as DQ is still very much alive and kicking ass… just as Skye Sweetnam and her bandmates are continuing to do on this, their long-awaited and much-anticipated third album…

In a way, the only surprise with this declarative new release is that it has taken so long to emerge into the dark limelight: not only is it four years since the band’s last album, but lead track ‘Love You Wrong’ was actually released as a single almost exactly two years ago: and it’s not as if they’ve had much else to do in the interim, as the Überverse has been in virtual lockdown since shortly after their last visit to the Über Kingdom… But, it has to be said that it most definitely has been worth the wait, as these particular rock ‘n’ roll cyco-paths have come storming back with one of the most kick-ass and uncompromising albums you will hear this year. This is an album that definitely, and defiantly, takes neither prisoners nor quarter as it stomps your aural cortexes into submission, but in a way in which, rather than screaming in pain you’re left crying out for more and begging to be flagellated by it once again… and again… and again…

For the uninitiated (sic), Sumo Cyco play a blend of hardcore and riot-grrl inflected punk mixed with aggressive groove metal and pop sensibilities (and even elements of EDM and dancehall/ska), which result in tunes which draw as much from Lady Gaga, Paramore (check ‘Vertigo’) and P!nk (recent single ‘Bystander’) as much as they do the likes of Jinjer, L7 or the Über Kingdom’s own Hands Off Gretel.

The result is a glorious fusion of sounds which are catchier than an anti-vaxing conspiracy theory, with the various styles moulding together which is cohesive and intelligent, at no point sounding contrived or imbalanced, but rather perfectly counterpointed with one another, the punk edginess contrasting beautifully with the metallic aggression and the pure power pop joyousness of the choruses and the overall danceability of each and every song.

This is an album that defines the term “all killer no filler”, as every one of the tracks has “hit single” written all over them… well, they would if we didn’t live in a musical Überverse dominated by BRITS-style blandness and Cowell-esque corporate bullshittery… This is an essential purchase for anyone who enjoys music that pushes the generic boundaries, is not afraid to offend with its willingness to do so; music which melds aggression, commitment and passion with a genuine “fuck you” attitude, that is both irreverent and reverential – but, above all, has you immediately reaching for the repeat button even before the dying echoes of the final track have faded in the speakers.