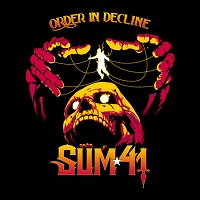 I sometimes wonder if Sum 41 is even capable of releasing a bad album. There is a good reason for their more than 15 million albums sold. From album to album, they are very consistent. It never matters if it is their older stuff from back when I was a teen or their newer stuff, I always know it is them and I never think that they lost what they had in the old days. Very few bands, especially in pop-punk, I can say this about. ‘Order In Decline’ is no different. Now I know I just set it up like this is going to be a total gush fest but it is not. I definitely have my issues with this album; but we will get to them later… first let’s talk about the good.

Musically, there is no way to be disappointed. The mix is perfect. Nothing is overpowering and nothing gets lost. I do not know what amps they are using or what settings they are on for the guitars, but they are set up gloriously. Very tight distortion with an excellent mid-range but also with very clear sparkling highs that never get piercing. The muted notes have a guttural chunk that you feel right to the soul, then they switch things up and will break a song down into a nice slow thoughtful experience with clean instruments. ‘Catching Fire’ is probably the best example of this. It is a beautiful song and one of my stand out favorites.

Vocally, again on point. We have the full range we have come to expect from them here. From softly spoken word to clear clean vocals to epic screamed power vocals it is all here as we remember from blasting their music as teens until the parents took the stereo away. ’45’ shows off the vocal range of the band gloriously. It is dripping with passionate delivery and wonderful nostalgia.

So, now let’s address the elephant in the room. This album is extremely political. Normally this is kind of expected with punk, but this is not the typical middle finger to the man type of thing we usually expect. This is very pointed at current American politics. Two years ago, that would have been great but now it is just another album that has an opinion on Trump. If you are out of the US I can’t think why you would care and if you are in the US whatever side of the political spectrum you are on you probably hear enough about what is going on all day that when you put on your music I would guess you want to escape from it for a bit not get more of it. I think it is just too late for that topic anymore. We already all know.

So in the end if you don’t mind the heavily political subject matter, or if you like it, then yes, absolutely buy this album. Musically it is one of their best, truly a work of art. However, if you just can’t stand to hear another political diatribe about Trump then listen to it first before you buy. It is still a great album, but it feels like they are saying what everyone else said first. It missed the right time for the subject.