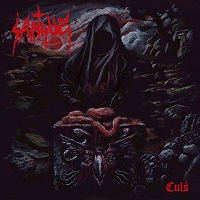 Hailing from the Italian capital of Rome, black metallers Sangue (who, incidentally, appear to be one of a number of different bands from the same corner of the Überverse sharing the same name but playing different forms of metal) take their lyrical and musical inspiration from a time before the Empire which burst forth from their hometown and conquered vast tracts of the then known world. As you would expect from a band working this genre, they harken back to pagan times, when men spent much of their time placating angry gods whom they believed had the sole objective of bringing divine wrath and destruction down on their evolutionary shoulders. And it is the anger of these gods that permeates the length of this debut opus.

To be brutally honest, ‘Culś’ is nothing you haven’t heard a thousand times before and will hear another thousand more.  Fierce and brutal in equal measure, frenetic in its pace (well, apart from the orchestral intro, scored by the Italian composer Claudio Simonetti, and subsequent interludes), and possessing more than enough dank atmospherics to please even the most critical of extreme metal aficionados.

The standout performances are those of drummer Andy ‘Rectal Stench’ Wank, perhaps best known for his stint in ‘90s Austrian death crue Pungent Stench, who, ably abetted by the rumbling bass of MeTa, is solid and precise while also elaborative when needed, and vocalist Mirko ‘Offender’ Scarpa, who delivers the right balance of grimness and tortured angst to capture the anger offered forth by the overall sound. The guitars of Valerio Scissor and Yama Welt also work well together, bringing some nice melodic touches in among the dark density of the riffs.

Overall, not a bad album. As I said, you’ve heard it all before and will hear it again, but this is nevertheless a worthy debut from an obviously experienced troupe of musicians who know their way around the sound they purvey.