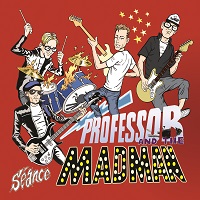 Having discovered Professor and the Madmen on being sent their previous album, ‘Disintegrate Me’, it was refreshing to hear the surf-punk supergroup live at their only full performance together (later released as a live album, ‘Live at the 100 Club’), which truly caught the joy and vibe of the evening. Knowing that Alfie and Sean, as the main songwriters and prolific tourers stateside, don’t like being constricted by the traditional punk sound, despite being so heavily involved in it for so long, I’m left with a genuine curiosity for what they would diversify into with this new release. Into the first listen, then…

While their previous efforts have had an air of ‘60s psychedelia about them, this intensifies somewhat from the very off in this release, as even though some tracks such as ‘So Long’ are still very much in their previous vein, the Lennon/McCartney manner that Sean and Alfie initially started this band off very much shines through in this release, probably even more so than their previous 3. They have also reverted to a loose theme for the album, as per the two ‘Elixir’ albums they debuted with, with the theme being an unknown and unseen force in this world watching mankind, trying to guide us away from what seems an intrinsic hatred of each other at times and the manner in which try to do so.

As we get through the album, the gorgeous melodies that almost assault you at every turn, both musically and vocally just continue to pour out of each second of this release. Tracks like ‘Real Me’ reinforce the Beatles sound I mentioned above, with a ‘Ticket To Ride’ atmosphere about it, though done in a sympathetic way in their own surf punk manner rather than any case of lifting the feeling directly. While the loose theme continues, there is almost undoubtedly some self-reflection in amongst it, with previously mentioned ‘So Long’ lyrically showing an almost disillusionment with some aspects of the touring lifestyle, shown best in lines such as ‘I’m a stranger in my own home’ and the ending two, ‘Now I think we’ve reached the stage where we’ve all seen better days, have to go our separate ways and say ‘so long”. It’s also noticeable that Alfie wrote this song, which, given he previously had to leave the scene to concentrate on his college studies, is perhaps an indication that there is a lot more depth to this release than the obvious faces you see on it initially.

We are over halfway through the album before we get what seems like some new characters introduced into the mix, with a scientist and a homeless man, each getting a monologue with the latter’s being in response to the first, with the lamenting, broken homeless man wishing for a return to the time before his own mistakes left him in the awful position he finds himself in. In its own manner, this almost feels like a punk sideswipe at the current homeless issue that a lot of places in the Western world seem to be finding themselves in and again hints at the depth and thoughts behind the initial theme prevalent throughout the album, showing a higher level of intelligence to the writing if you maybe look more at the words – pretty fitting for a band called Professor and the Madmen! The final two songs, after a meeting with ‘The Council’ in purgatory, bring us to the re-awakening of mankind after a long period and a final warning to not repeat its mistake of the past from the unknown forces.

I find myself having to curb my excitement with this release slightly due to the sheer volume I would probably end up writing (and possibly bore you with!), as this entire album is enveloped by an almost sugary sweet sound through most of it, while approaching subjects that are, at times, far from it, the juxtaposition being another indication of quite how good the writing combination of Alfie and Sean are. There are definitely hints of ‘Quark, Strangeness and Charm’ era Hawkwind that pervade this album in addition to the prevalent Beatles theme, with Rat and Paul providing an exquisitely able addition to the songwriting and guitar harmonies of Alfie and Sean, with Paul’s basswork being higher in the mix than you may often find – perhaps the reason, in addition to his ability and style, that I am maybe finding an aura of Hawkwind about their approach, in addition, the lyrical concept.

In short, this is a fantastic release that will almost undoubtedly find itself well placed in my end of year lists. From the mastering and engineering through the harmony riddled tracks, the high standard of instrumental ability to the eminent songwriting, this an album that deserves to launch Professor and the Madmen into another stratosphere in its own right, regardless of the past and other endeavours of its members.

A release that should have wide appeal, even through to a more mainstream audience, such is its ease of approach.