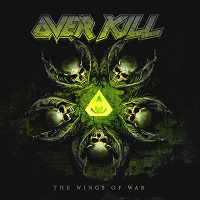 When a band who are regarded as pioneers of the genre in which they ply their trade release a new album, there quite rightly is a high degree of expectation, as well as the inevitable questioning as to whether or not the act in question can still deliver the goods. Fortunately, in the case of this, the 19th studio offering (a remarkable achievement in its own right) from the thrash wrecking crew that is Overkill, the expectations are more than fulfilled and the latter question is answered with an extremely affirmative “hell fuckin’ yes” as, like a good wine, Messrs Ellsworth, Verni et al just seem to get better with age.

When I first listened to this on the ÜRHQ death decks, I posted a Facebook status which said, quite bluntly, “this album will rip your head off at 500 paces!”. Even more than a week, and multiple listens, later, I can think of no better summation, as ‘The Wings Of War’ continues to see Overkill not only soaring high but also showing no signs of slowing down, even four decades into their career.

An apocalypse-inducing electronic pulse serves up the intro to ‘Last Man Standing’, before DD Verni’s immediately identifiable bass thud starts the build up to the main riff, which then explodes from the speakers like a mega-tsunami of power and force, the twin guitars showing no mercy to the listeners’ neck muscles, Jason Bittner’s double-kicks pummelling and pounding with furious intensity, before Blitz’s unique vocal sees the singer positively frothing at the mouth with the rabid nature of his delivery. Right from the off, you know that this is Overkill at their finest, as so it proves over the rest of the album…

We need no second invitation to ‘Believe In The Fight’, new recruit Bittner (formerly of Shadows Fall, Flotsam And Jetsam and Stigmata, for those who need introduced to him) kicking it in with a drum roll that sounds a simply rallying call for metallians everywhere to march into battle with Overkill carrying the battered standard. Dave Linsk lays down a characteristic staccato main riff, ably supported by the rhythm of work of Derek Tailer, who also intertwines perfectly with Verni – and the gang vocal on the chorus is as infectious as it is rousing. There is not a single chink in Overkill’s armour, in terms of either their individual and collective performances or the sheer quality of the ten tracks offered across the album’s 51-plus minutes. Ellsworth’s snapped instruction to “listen” at the end of ‘Believe…’ should be heeded with hesitation or questioning.

The second single to be extracted from the album’s grooves, ‘Head On A Pin’, is described by Blitz himself as “Black Sabbath on meth” – and I can certainly see his point, as the twin guitar lines and vocal melodies entwine their way into your very bloodstream, while the main body of the songs pounds heavier than a battalion of Panzers bulldozing through the Maginot Line.

Ironically, the album does have its more experimental, moments: ‘Bat Shit Crazy’, for example, while retaining its thrashiness, is closer to classic NWOBHM is its overall feel, and even contains a psycho-goth breakdown, while follow-up ‘Distortion’ contains elements of more latter-day progressive metal and the manic ‘Welcome To The Garden State’ is fuelled to the brim with punkish energy which most definitely belies the age of its producers… But, then Overkill have never been afraid to push the boundaries of the genre while remaining true to its inherent base elements.

Throughout history, old gods have been replaced and usurped by new ones. In the case of the thrash genre, the new kids on the block most definitely will not be taking their place in the metal firmament without severe resistance from the incumbents who formulated and developed the genre. With the likes of Flotsam And Jetsam and Metal Church having already laid down their markers at the end of last year, Sacred Reich re-united with Dave McClain and back in the studio after almost a quarter of century of silence, the vets are showing no sign of going quietly into the night. ‘The Wings Of War’ is a proud flag carrier for the old guard, and sets the standard by which every other thrash album this year will indeed be judged.