Death Tribe – ‘Beyond Pain and Pleasure: A Desert Experiment’ (Self-Released) 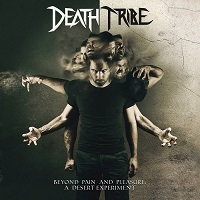 2018 was a massive year for Lebanese black metal heroes Kaoteon. Not only did they release a stunning second album in ‘Damnatio Memoriae’, but the band managed to bag an award at Metal Hammer’s Golden Gods awards and Anthony Kaoteon finally joined Walid Wolflust in the Netherlands to ensure the band could pursue their ambitions as a full-time concern. Yet, even with all of this going on, Anthony has managed to find time to spawn his own solo project – the band Death Tribe, described in their bio as “a project inspired by the suffering of warfare, spirit breaking oppression and the refusal to submit to either”.

With personal experience of both, it shouldn’t come as a surprise that the music of Death Tribe is a snarling, powerful and somewhat soulful beast, simultaneously exploring some of the very worst humanity has to endure whilst championing the diverse styles of heavy metal. Joined by an all-star cast of musicians from both within the Middle East and further afield in Europe, Anthony has created something which is more akin to a heavy metal mix-tape than the traditional, static-style album. Extreme metal territories are well represented in the majority of the band’s material – as one would expect, having heard Kaoteon – but more surprising is the inclusion of more alien styles like groove metal and classical heavy metal into the mix.

Indeed, while the record starts out more or less exactly as one would expect – massive death metal grooves, a buffet of snarls, growls and shrieks – later tracks like ‘Death Blues’ come out the gates like a cross between Megadeth and King Diamond, while ‘Face The Facts’ is a thick slab of groove metal prowess. Throughout it all one fact becomes increasingly obvious – Anthony Kaoteon really loves heavy metal. The sheer amount of homage paid on each style could only come from a voracious appetite for music, and the execution is superb, each instrument sitting high enough in the mix that you can pick out each individual part and fawn over just how well it is all orchestrated.

Much like Watain’sTrident Wolf Eclips, the record features a booming kick-in which sets the tone early on, building outward from the initial explosion of ‘Hollow’ towards traditional death metal forms in ‘Beyond Pain and Pleasure’. What is most astounding about this record however is that even with its feet firmly within the underground and extreme metal camps, Death Tribe have managed to craft songs which feel like stand-out metal singles. ‘Implode Explode’ is absolutely massive and could easily exist in a set with the likes of Gojira or heavier Mastodon, its vocal melodies heavily reminiscent of the latter whilst taking the sheer virtuoso prowess of the former to craft something transcendent.

Much as Sinsaenum did last year, Death Tribe’s ‘Beyond Pain and Pleasure: A Desert Experiment’ stands as a record which both pays tribute to – and builds upon – the hallmarks of great death metal. There isn’t a part of this record which doesn’t feel like it was built out of sheer love for metal canon, but the record goes far beyond paying mindless lip service in favour of injecting its own ideas and motifs into the mix. Take the flow from ‘Psychopathetic’ into ‘Death Blues’ – despite being stylistically on completely different plains (the former a furious death metal beatdown, the latter fist-pumping heavy metal thunder) it all flows seamlessly, feeling like an extension of an idea rather than a jarring shift to different territories.

As previously mentioned, the true MVP of Death Tribe is in just how excellently this record has been mixed. There is no sense of cutting corners or needlessly muddying up things, but at the same time it doesn’t feel overly sanitised either; the sheer filth of the music still oozing through. Drafting in Linus Klausenitzer (Obscura) and Mattias Landes (Dark Fortress) as core musicians on bass and drums respectively, the record has a sense of cohesion that is almost unbelievable when you consider these musicians don’t play together on a regular basis. Even so, there is a tightness to Death Tribe’s sound which makes the band stand out amongst the crowd, while each individual part flexes its muscles just enough to show some serious flair.

‘Beyond Pain and Pleasure: A Desert Experiment’ features a number of guest musicians from around the Middle East, including the likes of Serge the Slave (Aramaic), Adnan Mryhij (Svengali), Youmni Abou el Zahab (Ascendant) and JM Elias (Damage Rite, Svengali) as guest vocalists throughout the record. Reading into the story of the band – and the fact much of its ideas came from Anthony’s experiences both living in war-torn Lebanon as a child and later his encounters with the metal community in Dubai – it feels like the record is both an excitable expression of what is to come for its core musicians as it is a parting love letter to the Middle Eastern metal scene.

In combining these disparate worlds and drawing on their own emotions and experiences, Death Tribe have crafted something which feels both inherently underground, but also transcends the boundaries of that world. This record is nothing short of spectacular, each and every performance wringing every ounce of talent from its musicians to ensure that the whole thing sounds bigger and better than about 90 per cent of its contemporaries, standing shoulder-to-shoulder with the very best that extreme metal has to offer.