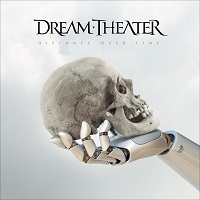 There can be no doubt about it: I think we can quite safely say that Dream Theater are THE pioneers of the modern progressive metal sound.  Their iconic debut, ‘When Day And Dream Unite’ – an album which, at the time of writing, is just a few weeks short of celebrating its 30th anniversary – merged prog rock values with those of classic rock and thrash, combining power, speed and, above all, melody in a way which a few artists had attempted but had so far failed to achieve to such a gloriously successful degree.

Of course, over the intervening three decades, the band have undergone their travails, both personally and musically, and many other bands have come along to try and lay claim to their crown as the premier progenitors of the genre (not least, it could be argued, Sons Of Apollo, who of course feature two former members of the Theater troupe – sic) but one thing has remained constant – their desire to continue to push the boundaries of the genre but also remain true to their own roots and ambition. And this is most definitely reflected by this, their 14th studio and their fourth with their current line-up.

One thing which is immediately evident is the freshness of the album, which is perhaps a result of their “old-fashioned” approach to the recording, which was to lock themselves away in a remote location, write and jam together and then lay down the results immediately.

Equally, the result is as bombastic, as overblown and as pompous as one would expect from a Dream Theater album – but all in a good way, as none of these qualities serve to overpower either the quality of the musicianship or the individual songs, but instead serve to illustrate that, if recent albums had sown any doubts as to whether not the band were sacrificing songwriting for showmanship, then ‘Distance Over Time’ certainly restores the balance – and, if anything, sees them turning back the clock to their more formative years and the albums which first brought them to public prominence, and pre-eminence.

A further result of this refreshed approach is that ‘Distance…’ is also an extremely friendly album in terms of commerciality, with shorter songs seeing them almost veer into “hit single” territory’, especially on the likes of ‘Paralyzed’, ‘Bar Stool Warrior’ and the power-ballad (yes, you read that right) ‘Out Of Reach’, which are virtually poppy by the standards of what we may have come to expect from the more “epic” material for which they are renowned. By the same token, there is also a homogeneity to the entire album, meaning that not only can you lift out individual tracks and enjoy them in isolation, but also sit back and let the overall listening experience wash over you with the sense of enjoyment of being in the company of old friends popping ‘round for a glass of merlot and a chinwag you haven’t enjoyed in many a year but only seems like yesterday since the last visit.

The problem with many progressive metal acts, and the resulting albums, is that you just find yourself sitting back in awe of the musicianship, without drawing on that emotional string that makes you want to interact with it by headbanging around the living room like a 15-year old. ‘Distance Over Time’ restores that balance… now where’s that glass of merlot you promised me?