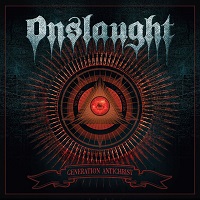 From a certain point of view, Onslaught could be considered a Christian band. They have an awful lot of lyrics that revolve around faith and theological issues and have in the past referred to Jesus Christ as an actual living being, rather than a conceptual or symbolic figure. Granted, that doesn’t necessarily mean they like him or his followers, however if you accept the idea that belief in the Devil also means belief in God, then yes, Onslaught would be a Christian band. The Son Of God will return people, but he doesn’t yet know he’s going to be gang raped by demons and trigger a nuclear holocaust.

If that little preamble doesn’t give it away, ‘Generation Antichrist’ is an album that fully embraces metal’s more cartoonishly evil side. And it’s way more fun than might be assumed. These veteran thrashers are happy to write songs about mass murder and cover their records in pentagrams, but that’s not because they’re card-carrying Satanists, it’s because shouting “spitting blood in the face of God” at a Church picnic is funny.  Their fanbase should absolutely lap this up and its grimly violent content seems very timely given that we’re currently dealing with a global death plague.

It’s also their first album since their 2005 reunion without vocalist Sy Keeler. This is probably going to cause some nerves as the last album they recorded without him – 1989’s ‘In Search Of Sanity’ – was a flop. It was actually really good but suffered from a serious problem in that it didn’t sound like Onslaught and they’ll no doubt be eager to avoid the same thing happening here.

Thankfully, even with new-boy Dave Garnett on mic duties, they’re still recognisable as the UK’s most eeeevil thrash band. The violence and offensive content hasn’t been toned down and while Garnett doesn’t quite have Keeler’s range or dexterity, he’s still an impressive focal point. The riffs are monstrous, the choruses catchy and there’s a wealth of unpleasant lyrics to scream out loud next time they play Bloodstock. ‘Strike Fast, Strike Hard’ and ‘Bow Down To The Clowns’ are a formidable opening duo, all razor edged guitar lines and vocals that demand a fist-pumping singalong.

‘Addicted To The Smell Of Death’ is equally vicious; a nasty, circle-pit inducing little anthem played by working-class headbangers who didn’t think Venom went far enough. ‘All Seeing Eye’ is mildly problematic as parts of it are dangerously similar to Testament’s ‘The Haunting,’ but the evangelical-baiting title track and hilariously bad taste ‘Religiousuicide’ more than push the doubts away.

‘Empires Fall’ is straight down the line, malevolent metal. There’s no pretensions about it, just pure headbanging fury. It’s meat and potatoes yes, but it gets the job done and Garnett gives a fist clenching performance that Keeler would be very proud of. The closing ‘A Perfect Day To Die’ meanwhile rounds things off nicely. This one has existed in various forms online for over a year now, but for those not familiar with it, they’ve resisted the urge to drop an epic finale. Instead it’s another catchy pit igniter, clocking in under four minutes and with a real earworm of a chorus.

The road has certainly been rocky for these boys since they originally formed and truth be told, Onslaught 2020 bears very little resemblance to the original incarnation. Their post-reformation output has been consistently entertaining though and while this doesn’t quite scale the heights of 2011’s ‘Sound Of Violence,’ it’s another darkly enjoyable collection of songs from the devil worshipping bastards. Time to clean the collection bowl vicar, someone’s been gobbing on the donations again.