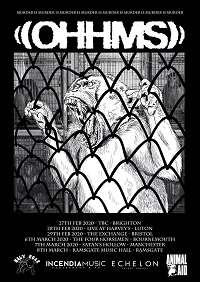 OHHMS have been a band that’s popped up on more gigs in Manchester recently that I can count: they always seem to be playing Rebellion or Satan’s with a myriad of supports. For today’s show at Satan’s they bring with them a favourite of mine in the form of drone metal six-piece, Hundred Year Old Man, and Agvirre, with local live music expert, John Badger manning drums.

Agvirre kick off with a spoken word intro before starting with a song that sounds like an odd mix of Celtic folk and black metal. The vocals clash with the music as a whole but oddly accent it fairly well with heavily reverb laden screams, I’m really digging this sort of sound though especially with the lovely violin playing alongside it. I don’t think I’ve ever seen a violin played in a black metal tremolo style before but it’s bloody interesting to watch, the overall sound is great too as you can properly hear every part of the band.

Partway through we get some backing vocals that harmonise in an ever so slight discord that sound dreamy and psychedelic. Agvirre jump between styles in the middle of songs, often at the drop of a hat but this doesn’t seem jarring in the context of the band’s sound. To say that this show is intense is a bit of an understatement, the band builds tension with the songs while the singer looks like he’s screaming so hard that he might end up popping a blood vessel. Solid set on the whole, give them a listen!

Hundred Year Old Man, as ever with their atmospheric intros and copious amounts of smoke, move to Satan’s circular stage to the backing of a discordant drone. Normally they’re a bit more hidden than this but the stage here doesn’t really allow the smoke to stay put sadly! The moment they kick off in full with their slow drone and the backing lights come on, the atmosphere is set, the smoke hiding them behind white floodlights. HYOM are experts at building tension, and their droning, pulsing sound fills every corner of Satan’s.

For every heavy part, there are ambient soundscapes to accent it, and for Satan’s hollow, they’re doing a fantastic job of working with the open stage setup. I’ve seen these quite a number of times now and they have yet to disappoint, their live show really is quite something to behold, from the small shows like this all the way to the massive Sophie stage at Bloodstock. One of the interesting parts of their sound is the often post-rock elements that come into their sound, especially during the ambient parts, it’s like if Explosions In The Sky wanted to suddenly include a bunch of death metal in their stuff.

Just as OHHMS kick off, I’m reminded that I don’t have my earplugs in for their insane level of volume. These guys are a band that can’t quite decide whether they’re prog, doom, stoner or death. Each song they play through dips its toe into so many genres, that it’s no wonder they can play shows with the variety of bands they do. It’s also good to see Satan’s Hollow has got a pretty good turnout for them too and people are really going for it with their enthusiasm for OHHMS.

These guys really are a treat to watch, not just listen to: they move around a ton, which is more often than you’d expect with a lot of bands.

The sound of the band is big, fat, and dirty as you like, they sound bloody great tonight and I’m getting progressively more hyped to see them on a big stage at Arctangent this year and going a bit more bonkers in the crowd! Honestly it’s kind of hard to put a label on OHHMS, their set at this show has been a really varied selection of music that’s not really stuck around one particular genre, the sort of genre bending that I’ve seen the likes of Boss Keloid do before. On the whole it’s been a really solid show and all three bands on this bill have each brought something different to the table and it’s been an enjoyable Saturday night show.

Also, I’ll keep my fingers crossed that Hundred Year Old Man eventually get a support slot for The Ocean Collective, because that’d be such a massively perfect pairing.