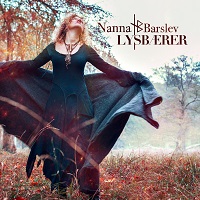 ‘Lysbærer’ is the debut solo album of the renown Nordic folk artist and composer Nanna Barslev, who invites us into a hidden world between dark and light in nature and human nature, from misty underworld roots to ancient mountain calls, from scenic battle fields to meditative healing spells, with protection spells and words from the Edda. Sounds intriguing so far…

The album title, ‘Lysbærer’, which translates to ‘Carrier of Light’, is a reference to the celebration of the sun and the moon, lighting up the dark and changing seasons. The circle of life and death connecting with nature and the nature in us humans. The dark and light theme is the main essence of the vision in this album and follows up with the theme of chaos and cosmos from Nanna’s previous single ‘Skelfr Yggdrasil’, released in 2019.

Interpretation of Nordic folklore and mythology themes are one of Nanna’s signatures, expressed through her mesmerising and fascinating voice, that ranges from experimental old Nordic singing techniques to underworld growling and whispering.

So let’s get into the review. ‘Skjoldmø’ I believe translates as ‘Shield Maiden’, and it is a wonderfully evocative track complimented perfectly by Nanna’s soaring ethereal voice. The frame drums add a real drive and the bowed string sounds just add to the overall ancient feel of this beautiful track. ‘Runebundet’, or ‘Rune Bound’, manages to tread a fine line between traditional and the sounds of medieval folk combined with something more contemporary. In some ways it reminded me of Clannad’s approach to some of their music, but still retaining a refreshing originality.

The next track is the album’s second single, ‘Mod Vrede’, which means ‘Against Anger’. It starts with the signature droned strings before the introduction of the frame drums and Nanna’s haunting vocal. There are some striking chord progressions which really add something special to the song. It is always a sign of quality when time seems to pass quickly when listening to an album, and ‘Lysbærer’ is definitely one of those experiences. ‘Mod Vrede’ really showcases Nanna’s extraordinary range of vocal abilities and styles.

In truth, I am not certain of the translation of ‘Askr’, but it might refer to the ash tree. It has quite a medieval feel to it, with bowed stings floated effortlessly in the background accompanying Nanna’s soaring vocals, she has quite an astonishing range to her voice. ‘Askr’ builds in its magnificence as the song progresses and is very moving. ‘Lysbaerer’, the title track, is next. As stated earlier it means ‘Carrier of Light’. Musically it continues with the sounds it has used so far on the album. Mournful and expansive, it evokes the feeling of galloping across the Scandinavian landscape. It is fair to say that instrumentally ‘Lysbaerer’, as an album uses a limited palette, yet each song is distinct and compelling while fitting together as a cohesive whole.

Again, I’m afraid I have no translation for ‘Rhimfaxe’, but it may refer to the glacier found in Greenland said to be named after Hrimfaxi, the cosmic horse of Norse mythology; however, bear in mind this is my best guess. ‘Rhimfaxe’ has some really interesting rhythms which help to drive the track forward. It is folky with a medieval twist. ‘Jagtmarker’ means ‘Hunting Grounds’ and its beginning is heralded by a Viking horn. There are some rather spectacular vocal, keys and string interactions which make for a beautifully emotional and evocative piece. Nanna finds another level with her singing that really pulls on the heart strings and has quite a tribal feeling.

Again I am not one hundred percent sure of the translation for ‘Sunna Sol’, but sol means sun. Delicate vocals are floated above what sounds like a harp before the drone of strings again takes centre stage on the backing for Nanna’s extraordinary voice. It reminds me of some of the projects that Lindy-Fay Hella has been involved with. ‘Sten’, or ‘Stone’ is the final track of the album. It begins with samples and Nanna’s ethereal voice which gives it a certain medieval feeling. Full of emotion it is a radically stripped down song with a bare smattering of anything instrumental. It is very moving.

And that is it, the end of another stunning album from the people at By Norse Music; they certainly seem to have a very talented rosta and Nanna Barslev is a strong addition to their catalogue. If you like Wardruna, you are going to love this album.

‘Lysbærer’ is released on Friday 18 March. You can get your copy HERE.