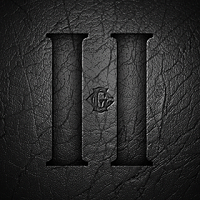 To be honest, I hadn’t come across Kent quartet Gallows Circus until this, their second EP (as if you hadn’t guessed from the title) popped into the inbox here at ÜRHQ a week or so back. Given that it came from one of the few PR agents whose judgement I trust almost implicitly – one who doesn’t send out any oul’ shite willy-nilly, but targets us journalists with stuff he genuinely believes we will like (or at least give an honest listen) – I had no qualms about checking out his latest recommendation…

And I’m genuinely glad that I do so, as ‘II’ is a highly credible and impressive offering from an exciting young band who definitely know what they’re about – and that’s about treading that blues-infused rock ‘n’ roll highway that runs all the way from Mott The Hoople and the incomparable Thin Lizzy (mentioning them in any publicity collateral is immediately gonna attract my attention) to modern-day reprobates such as Rival Sons and Those Damn Crows.

Opener ‘Hell’s Whiskey’ immediately sets the tone for what is to come, easing in gently with a lugubrious intro which slowly evolves into a drawling bar-room boogie riff from Ben Attwood, which in turn is perfectly complemented by Ian Day’s rich, harmonic vocal, whose clean delivery perfectly accentuates every vowel with every ounce of passion in his surprisingly young rock ‘n’ roll soul: and that scream at the end is guaranteed to send a shiver down the spine of even the most grizzled veteran of the scene.

‘Medicine Man’, cleverly picked as the new single punches with the intensity of two super-heavyweights in the opening round of a championship-unifying do-or-die fight, while ‘Who Cares’ struts and swaggers Lee Marvin with the smell of a ten-year old malt teasing his nostrils, before ‘Bring Your Crucifix’ drags him outside for that all-important shoot-out finale, firing with both barrels simultaneously. And, if you turn to run from this particular gunfight, then the boys will ‘Hunt You Down’ and drag you back to that gallows pole, all the time kickin’ yer arse and reminding you that this is exactly why we love rock ‘n’f’’n’ roll – especially when it is delivered with such zest as this.

Barkeep, fire me up another of that there ‘Hell’s Whiskey’… make it a double… oh, and I’ll be having the bottle to go…