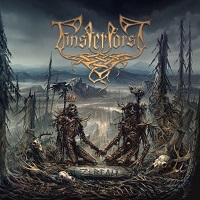 Hailing from Germany’s Black Forest, metal band Finsterforst have been blending a sound of black and pagan inspired metal mixed with orchestral sweeping soundscapes since 2004. With a discography spanning seven releases back to 2007, Finsterforst have earned themselves a widespread fan base and critical acclaim for their branch of metal. Their previous release ‘#YOLO’ was taken to be a slight departure from their darker, grander sound. However, ‘Zerfall’ is set to see the band return to their previous stylistic output and push them forward to a new level. At just five tracks long, where does Finsterforst take us?

Opening with, ‘Wut’ the 13-minutes plus opener gives an example of what to expect. A crushing distorted guitar riff kicks the track off before the pounding drums interject and a choral layer of vocals thickens out the texture. This is a grand introduction and immediately pulls the listener in. with the full band coming together mixed with orchestral layers, there is already a hefty weight to the sound, yet through the dynamic movements, ‘Wut’ still builds and evolves as it progresses. The phrases of full instrumentation give way to sparse moments with only the rhythm section and guitars evident before the track rebuilds once more. The sweeping, thick texture retains a sonic interest in not only the dynamics but also the rhythmic devices used. There is blend of both heavy metal and traditional folk elements which, when combined, creates a powerful sledge hammer sound that has also has a highly engaging subtly to its edge. In the latter part of the track, the Black Metal edge is ramped up, the drums become more ferocious in their delivery, laying down punishing blast beats while the guitar work frantically provides the accompanying riff. The vocals become more guttural with the higher range edge of black metal enabling them to cut clearly through the swirling wall of sound.

The title track carries on the heavier side of the band’s sound. Opening with the powerful drums before the guitars flesh out the texture with both driving riffs and slick lead work. The orchestral layering is still present with added instrumentation and building choral vocals. When the vocals enter the mix, the track backs off into a deep, brooding nature. The bass guitar becomes the prominent driving force accompanied by an acoustic guitar. The vocals themselves take on a spoken word like quality that lends more weight to the darker brooding sound being created. The track then opens out into an anthemic quality, led by vocal harmonies taking on a key change the full instrumentation kicks back in and lifts the whole track. With is song structure, identifiable breakdowns and well executed guitar solo. ‘Zerfall’ represents a slice of more traditional heavy metal when compared to the previous track. It is still immensely engaging and the song writing and crafting of the track still creates music that works on a number of different levels as each layer is exposed.

‘Fluch des Seins’ and ‘Weltenbrand’ continue to engage the listener and exemplify the sound of Finsterforst. The former opens with a grand, layered choral section. With a wash of reverb creating a wide sweeping echo giving the sonic illusion of a great hall in which the choir is singing. The full band kick in with a stomping rhythm and folk instruments picking up on the vocal melody. The choral layers continue on adding to the heavily thickened texture. There is no muddying of the sound though as the mix allows for each part of the instrumentation to be clearly heard. When the main lead vocals kick in, their delivery leads the music into the darker black metal region with the genre typical higher ranged guttural style. However, the chorus like sections open out into an anthemic like style with the vocal harmonies layering into a more melodic delivery.  Following the brief breakdown, the latter part of the track takes on a full heavy hitting metal approach. With the tempo increased, pounding drums and galloping riffs drive the track towards it’s colossal sounding anthemic close. ‘Weltenbrand’ picks up on the anthemic like qualities of the former track and expands upon the themes by including a stomping guitar riff coupled with a heavy weight rhythm section driving the force of the track. ‘Weltenbrand’ stands out as a straight forward sounding heavy metal track with a more defined structure that leads the listener through phrases via the guitar riffs and driving rhythms. With a call and response like section contained within it as well, there is scope for this track to get audience participation in a live setting.

The album closes with the undeniably epic ‘Ecce Homo’, a heavily edited version of which has been released as a single for the album. It is no exaggeration to use the term heavily edited as the single stands at just over five minutes, whereas the album version clocks in at more than 36! Over the course of which Finsterforst takes the listener on a sweeping, epic, heavy metal journey. Using all of the aforementioned techniques, song structure devices and instrumentation, the band have created a crowning centrepiece to their song writing. Beginning as a slow burner with minimal instrumentation and building soundscape, the vocals are introduced as a spoken word style, all the while laying the foundation as the track grows into a wider heavy metal colossus. The movements and phrases take in elements of Black metal, the folk music influences of the band and the grand orchestra sound that has been ever present in the album thus far. The layering of textures and dynamics gives the music a natural flow that engages the listener and enables the music to refrain from becoming stagnant which would be an easy trap considering its length and all that is encompassed within. From its gradually building intro, reserved acoustic led breakdown until the heavy hitting driving close, ‘Ecce Homo’ is an outstanding composition on the album.

Some may look to criticise ‘Zerfall’ as simply a self-absorbed exercise by Finsterforst to deliver a handful of tracks that are overblown, over produced and the band just trying to show off without providing anything of note. If anyone was to say anything like that, they’d be wrong and quite frankly missing the point. If you have an attention span of less than three minutes, which with the modern age seems to be an increasing issue with many music consumers, then it’s possible to suggest that anything over five minutes for a track would turn some people away.  However, the music on offer here is of a very high calibre and engaging from start to finish. With regards to having the orchestral and choral layers mixed with the traditional band instrumentation, if done incorrectly can detract from the feel of the music and be a case of overdoing the production. Not with ‘Zerfall’, it fully works serving to not only build the textured delivery of the tracks but also accentuate the emotional range of the song writing. The same can be said of Finsterforst’s core sound, mixing in the Black and Pagan metal elements with more traditional folk stylings, serving to create a unique quality and deliver a heavy hitting yet dynamic sound

With the track lengths as they are and the compositions taking in so many elements and layers, this is not an album that is suited to picking and choosing songs to listen to. While there are undoubted highlights and stand out moments, ‘Zerfall’ absolutely deserves to be listened to from start to finish without interruption. Some may see this as a chore, but if you enjoy metal and well written music then it is fully worth the time investment to get absorbed in what has been delivered here. Over the course of five tracks there is a swirling wall of sound with multiple layers to unpack. It’s heavy, subtle, bold, epic and excellent all in one.