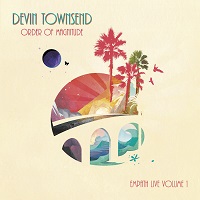 Live albums were, in the glory days of rock music, an important document of a band or artist in their raw, unpolished glory where they could stretch themselves and have fun with their recorded material. Classic live albums such as ‘Live After Death’, ‘Live At Leeds’, ‘Made In Japan’, ‘Alive!’, and ‘Live And Dangerous’ were more than bloated ways to suck another buck from the wallets of the fans – they became beloved records that stood head-to-shoulders with the revered studio albums by those bands. There was atmosphere aplenty, extended versions of popular songs, further interplay between the musicians than on the albums, and electricity that can only come from the live experience. Over the years, the amount of live albums that blew minds like the classics did have gotten fewer and fewer, and that old cash-grab vibe became more of a reality. But, every once in a while, an absolute banger pops up out of nowhere, such as ‘Under Great White Northern Lights’ by The White Stripes or Metallica’s ‘S&M’, records that truly captured the lightning in the bottle.

Ah, ol’ Devy. If ever there was an artist who could make a live album pop, it’s the mental genius that gave us Strapping Young Lad and about 43,362 other projects, all of whom were bursting with inspiration, lack of rules, and ridiculous amounts of joy. Whether with Steve Vai, his solo band, The Devin Townsend Band, Devin Townsend Project, or the woefully overlooked Casualties Of Cool, he has inspired and entertained hundreds of thousands over the years, and his live shows have always been a hugely entertaining experience. In 2019, faced with the tour for his incredible ‘Empath’ album, he decided to try something different – the touring cycle would be split into three volumes, each of which would throw off the shackles of click-tracks and prompters (usually his extravagant shows would need careful choreography, lighting, and timing to keep everything under tight control, for obvious reasons) and just allow the musicians to flow naturally.

Recorded at The Roundhouse in North London on the penultimate show of the tour, there’s an intimacy that we haven’t quite seen before, even with the huge ten-piece band and epic material on display, and it’s here where the man shines like a glowing orb. Whether it’s the exploratory ‘Gigpig Jam’, the menacing ‘Gato’, the fusion-infused ‘Ain’t Never Gonna Win’, the touching acoustic version of ‘Spirits Will Collide’, or the pure party-enthralled cover of ‘Disco Inferno’, the band and Devy kick out all the jams and then some, and it makes for a killer live experience.

The sound is full and juicy, Devy’s interspersed chats to the audience are as entertaining as ever, the band are on complete fire, and the choice of material sounds like it was just meant to be – this is the perfect setting for a future classic live album for all seasons. Considering Mr. Townsend’s history, this epic take on the live recording should be no surprise, but it plays like audio honey into the ears, and it’s just so much FUN.

‘Order Of Magnitude – Empath Live Volume 1’ will be released in various packaging including DVD and Blu-ray versions of the gig, but all the magic is already right there on the record and houses some amazing playing and volumes of entertainment. This is the stuff that musicians dream of when they first start out, and I’m so very glad that an esteemed artist such as Devin Townsend can realize his vision with such perfection. And, lest we forget, there are two more volumes of this magic in the future, and we will just have to wait with bated breath to see what those have in store.