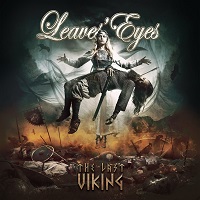 Have you ever found yourself sitting there with an urge to listen to some music influenced by the seafaring warriors of Scandinavia only to find yourself crippled by indecision? Struggling to decide whether you want power metal epics, folk metal joviality or symphonic metal serenity? Well fortunately it seems that Leaves’ Eyes has found their niche to cover all of these things at once with their take on Norse-themed metal.

If you’ve managed to miss out on Leave’s Eyes over the last decade or so, then you’ll have missed some pretty great albums documenting stories from the Viking sagas. We’ve already had albums about Leif Eriksson’s discovery of America (‘Vinland Saga’) and the life of the first King of Norway (‘King of Kings’) but now it’s time to pick up a tale from the tale end of the Viking era. ‘The Last Viking’ takes us back to England in 1066, a year that will be immortalised for many by the Hastings Insurance advert… Anyway, we pick up the tale of Norway’s King Harald, or Harald Hardrada whose death at the battle of Stamford Bridge signalled the end of the Viking Age.

The sound is pretty familiar to those familiar with Leaves’ Eyes, particularly the vocal styles. The band have always played the “beauty and the beast” card with abandon, and this album is no different. After all, if it ain’t broke, don’t fix it! Elina Siirala’s ethereal vocals are perfectly contrasted by the death growls of Alexander Krull to form the basis of the sound that will be familiar to those who have dabbled with symphonic metal in the past. But there is a little more to it than that though, as the band have gone all out with this release and have incorporated elements of other styles that you might not expect. The use of traditional Medieval instruments makes the music that bit more immersive, and the sheer variety of metal styles scattered throughout the album makes this as surprising as it is familiar.

After a gentle introduction, you’re immediately greeted with the bombastic ‘Chain of the Golden Horn’. This is a pretty addictive pagan hymn that easily performs the all-important job of grabbing your attention to drag you along for the rest of the ride. It’s raucous and upbeat with dark and heavy diversions during what is an otherwise bright and airy track. At times it feels like a bit of a mix between Blind Guardian, Turisas and Nightwish which is just the right combination to really tickle my testicles, so to speak, and causes me to get sucked into the story of Harald’s escape from Byzantium. Quite simply, if there was a song on this album that was likely to crop up on my regularly played tracks, it’s this one.

However, no review of this album would be complete without spending some time to focus on the ten-minute epic of a title track, ‘The Last Viking’, which manages to condense all of the drama of Harald’s life and eventual demise into musical form. It starts off with a foreboding drone and the sound of warhorns before taking the slow and heavy route (you know, the kind that causes you to do the slow headbang) that sounds like a battle march. After twisting and turning, the song reaches its climax at the battle of Stamford Bridge where things suddenly turn pretty frantic with some excellent guitar shredding. However, this isn’t quite the end, as there’s yet another onslaught of sheer heaviness predominantly led by Krull’s vocals that are drenched in aggression before finally concluding with the sound of traditional drums.

Overall, this is another great chronicle in the Leaves’ Eyes catalogue. While you may not immediately associate symphonic metal stylings with Norse tales, Leaves’ Eyes have yet again shown that it can be a perfect pairing in the right hands. This is well worth a listen if you have an interest in Scandinavian (and early English!) history, and an appreciation for symphonic metal with a bit of a twist. Even better, if you like this album there’s an added bonus on the way in the form of their upcoming documentary ‘Viking Spirit’ which promises to provide some glimpses into the growing Viking reenactment scene. So, there’s plenty more to keep an eye on when it comes to Leaves’ Eyes, and time will tell which tales will be the focus of their next album…