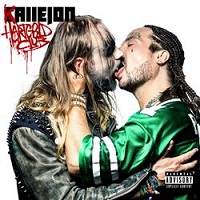 If the sight of two large bearded men lustily smacking lips together on the artwork doesn’t give it away, Callejon aren’t the most serious metalcore band in the world. The Dusseldorf five-piece remain largely unknown in the UK but they’ve been stalwarts of the German scene for years now and always pack the crowds in on the European festival circuit. Their brand of ‘core is upbeat and the focus is on good times rather than breakdowns and angst. There’s also a smattering of electronica in the mix, various rappers providing guest vocals and they seem more interested in sinking shots than raging against social injustice.

Or at least that’s the impression we’ve been left with because we’ve no idea what these songs are actually about. There’s two new cuts but otherwise, they’re all covers of German hip hop acts performed in their original language. It’s impossible for non-German speakers like us to make sense of anything bar the occasional reference to “sexy girls” and “Michael Jackson style” and while this might put a few listeners off, it’s strangely endearing. It’s Gangnam-style via Westphalia with bouncy guitar riffs and mosh-rhythms and against all odds, it works even if you don’t know your arsch from your ellbogen.

This does of course risk limiting their audience but singing in their native tongue never stood in Rammstein’s way did it? Callejon have got a couple of belters here too; from the ridiculous opener ‘Von Party Zu Party’ to the sledgehammer pit-inducer ‘Arbeit Nervt,’ there’s enough anthems to make you consider Berlin as a future holiday destination.

Providing you can get past the language barrier then, ‘Hartgeld Im Club’ is a blast. They’re the Teutonic equivalent of Crossfaith and even if they don’t crack this side of the channel, they’ll keep the circle pits spinning at Nova Rock for a few years yet. Plus, when you can’t understand what they’re saying, it removes all the misogyny and obnoxiousness that this kind of music sometimes drags along with it (To The Rats And Wolves, we’re looking in your direction). They could be pledging allegiance to Pol Pot or talking about drug rape for all we know, but given the homoerotic cover it doesn’t seem likely.