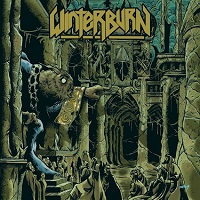 Never judge a book by its cover. If you were to see this album in the racks of your local music emporium, the first impression you’d get is of a black metal or prog rock album. You know the thing, something heavy and portentous or full of dense keyboards telling the narrative of some great quest. Nothing could be further from the truth.

Whilst certainly not without craft, intelligence and shimmering musicianship, Winterburn eschew the suggested inverted crosses and dragons and place themselves firmly in the grimy, but neon lit streets of LA’s Sunset Strip. ‘Ivory Towers’ brings the taste of the height of the 80’s metal bang up to date with a gleaming modern production with real bite, the polish balanced with some grit.

Opener ‘Sinners Swing’ could easily be the love child of an illicit romp between Van Halen and Ratt, the melody running through its DNA and the quicksilver flash of the fretwork. Close your eyes and you could be at the Whisky in ’83, the sweat dripping from the walls. What makes this feat of transposure even more impressive is that Winterburn is essentially a one-man band: Dubai’s very own Naser Mestarihi. Barring the drums, played by Thomas Prigden, the Grammy award winning skinsman for The Mars Volta and Suicidal tendencies, everything you hear has been performed by Mestarihi on this, Winterburn’s debut.

Featuring a slamming riff and nice frills, ‘The Ritual’ is guttersnipe street gang flickknife hard rock at its finest and ‘Calijam’ takes things to another level entirely, the funky rhythm and dexterous display of acoustic guitar wizardry giving way to a monstrous, metallic solo. With shades of Mr Big meets Extreme, this latter track shows the extent of the ambition at work here and opens the door to some interesting avenues. Not quite as successful, ‘Draw the Line’ certainly impresses with its showcase of Mestarihi’s skills with an acoustic but it’s bare bones approach highlights some of the limits to his vocal range that are covered with the more raucous offerings.

No such issues with the closing trio though as ‘Astral’ and the titular ‘Ivory Towers’ are rampaging beasts, the only let up to the fury being the brief ‘Vultures’ providing a minute’s respite. Both of these bigger tracks lean heavily into more pedal to the metal territory, full of brilliantly rampaging riffs and drums and bass that hit like a freight train, the final knock-out blow of an album that brings alive the sounds, sights and smell of those most hedonistic days. Always entertaining, this is one to crank up in the car and imagine you’re cruising down towards the Rainbow on a balmy summer evening.

‘Ivory Towers’ is feleased on Friday (10 December). Keep an eye on their social media for information on how to get your copy.