With the rays of light at the end of the dark tunnel that has been the past 16 months of isolation and generally being shit upon from great heights growing brighter by the day, the rock ‘n’ roll year that is 2021 now stands with its DMs firmly planted in the mire and muck of the chaos around it. A healthy slew of new music, perhaps more than at any other time in ÜR’s history, continues to ping itself our way, and especially in the continuing tsunami of submissions we receive for our coveted ‘Video Of The Week’ award… Yes, as we’ve said on multiple occasions, one constant throughout the vagaries of inconsistent and often hard to stomach lockdowns is the amazing level of adaptive creativity that bands and video directors the length and breadth of the Überverse have continued to show, often in the most adverse of circumstances.

After viewing all of the entries – and, yes, we did watch each and every one of the 150 or so submissions we received this past week alone – at the end of the day (or night, depending on where you are in the Überverse), there could be only one winner… and this week it comes from Trivium, who become only the second band to win our coveted #VideoOfTheWeek title for the third time, with another positively epic visual feast, this time for stand alone single ‘In The Court Of The Dragon’.

Trivium bassist Paulo Gregoletto told us a bit more about the song:

“We started putting together the riffs for what would become ‘In The Court Of The Dragon’ last year with no touring on the horizon. We decided to use the uncertainty to our advantage and to create without any of the limitations and commitments that would normally be eating away at our time in the jam room.

“The title of the song came from a short story by Robert W. Chambers. The story is filled with dread and uncertainty, and that felt fitting for the times we’ve all been living in for the last year. Rather than a direct re-telling, we decided to go a different route and build our own narrative around the music that we were creating.

“Similar to some of our past songs and albums, this song began with lyrics rooted in mythology. But unlike the past, we decided to create our own myth to fit the music. Being free to create the story and write the music without a deadline, due to a once-in-a-lifetime event, really led to one of the most rewarding writing and recording experiences we have ever had. We hope it lives up to your expectations.”

The track, and the accompanying nine-and-a-half-minute long video, once again directed by long-time Trivium collaborator Ryan Mackfall, features an intro written and orchestrated by Ihsahn. 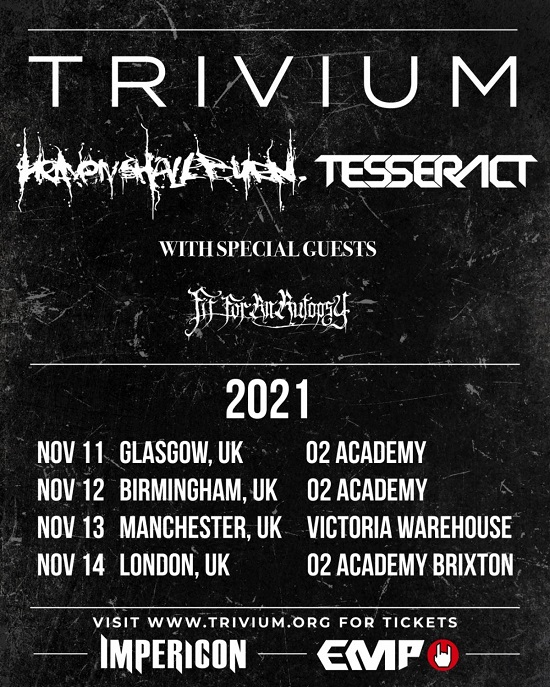