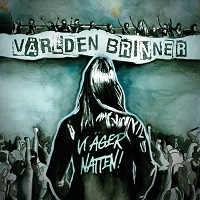 I have gone on the record several times – and most recently in this past weekend’s ‘Video Of The Week’ feature – in stating that the Scandinavian peninsula, and Sweden in particular, is something of a hotbed for seriously good quality punk music at the moment. The charge from the archipelago has been led by the likes of ÜR faves The Good The Bad & The Zugly, but there is a whole plethora of bands emerging from the back alleyways of Stockholm and elsewhere – the latest of whom to come to our attention here at ÜRHQ are Världen Brinner.

‘Vi Äger Natten’ (yes, the album’s title, like the band name and all 11 songs, is in their native Swedish, so, no, I don’t have a feckin’ clue what they’re singing about), is the quartet’s second full-length album – and, language barrier aside, a damn impressive offering it is too! But, then they do say music in itself is a universal language, so does it matter what tongue in which it is delivered? No, it feckin’ doesn’t, and neither it should…

By and large remaining true to the basic tenets of punk, ‘Vi Äger Natten’ is nevertheless a diverse album, offering mood swings enough to maintain your interest far beyond the basic, let’s bang the fuck outta our guitars and see what happens trap that all too many generic bands have fallen into. ‘Tas Förgivet’, for example, has quite a Siouxsie-esque gothic feel to it, while ‘När Allting Tystnar’ evokes the spirit of Hazel O’Connor before exploding into the sort of life that The Vibrators enjoyed so well.

While the three boys in the band perform their roles extremely well, the undoubted selling point is the strength of Malin Sandberg vocal performance, which combines anger and frustration, joy and sadness, passion and disdainfulness in the sort of measures that all great punk singers should seek to achieve but all to often fail. The overall result is an energetic and impassioned album that ticks all the right boxes and sets down a marker for many of their contemporaries.