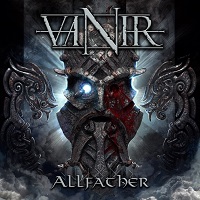 Formed in 2009, the Danish six-piece Vanir have returned for their fifth Viking metal raid ‘Allfather’.  Taking on the genre of Viking metal and infusing it with elements of folk-metal as well as heavier stylings of black and death – metal, Vanir created a solid foundation for themselves appealing to a wide variety of metal fans. Predominately their music focuses upon Nordic myths, legends and histories as is typical of the Viking metal genre and ‘Allfather’ is no exception to this with the lyrics telling of Danish king Svend Tveskæg. With 11 tracks on offer with this release, what do Vanir plan to deliver?

Opening with ‘Væringjar’, initially a doom-laden guitar riff and tribal drums greet the listener before the track opens up into a fast paced headbanging number. A guitar hook gives the track an almost pirate metal aura before the guttural vocals kick in. The fact that Martin Holmsgaard Håkan is able to deliver the lyrics in such a brutal manner while retaining a higher vocal register gives the music it’s black-metal edge. While there is a heavy melody courtesy of the guitar working alongside the vocals and the relentless rhythm section delivers the pounding drive. The black-metal vibe continues straight into ‘Svoldir’, the guitars create a sense of foreboding combined with a choir like chant thickening the texture before the full band kicks in. the tempo is slightly less than that of the opening track, and the vocals come down an octave to mimic this creating a far more intensely heavy track. A guitar break shifts the tempo and as the track reaches its culmination, the vocals increase in intensity and drummer Daniel ‘Luske’ Kronskov unleashes a wave of blast beats to see the track to its furious conclusion.

Just two tracks in and the stylistic theme of the album is firmly set and continues unabated. The melodically led ‘The Final Stand’ features some seriously catchy guitar hooks and skilled dual work between Phillip Kaaber and Kirk Backarach. The epic ‘Ironside’ the longest track on the album moves between melodic heavy and straight out death metal, the shift in techniques and styles keeps the track moving forward and retains sonic interest. All the while the lyrics tell a tale that would be worthy of a fireside in a Viking hall. ‘Fejd’, has elements of power metal with an acoustic guitar driven melody line combined with almost uplifting lead vocals. However, the heavier twist comes in the form of a well-crafted call and response between the cleaner lead vocal lines and the throat tearing technique that has been ever present thus far.

It’s clear throughout this album that Vanir have definitely got the balance right between the Viking metal aspect and the heavier black-metal style. There’s a weight behind the song writing that keeps the relentless power going, all the while the music doesn’t get bogged down or repetitive. Tracks like ‘Thor’ and ‘Ulfednar’ have a raw power showcasing the song writing while simultaneously demonstrating the technical abilities of the musicians involved. Indeed, it is the technical aspects that help to elevate Vanir above their peers in the Viking metal genre. The shift in dynamics throughout the tracks as well as the stylistic elements and individual musicianship gives the music more of an edge. It’s not simply a group of guys who’ve decided to take dressing up as Vikings one step further. Vanir have thought not only about lyrical content, as mentioned above it’s an album based on a Danish King which gives it a consistent theme, almost a saga given the subject matter. But they’ve also clearly identified how they want to portray the music sonically, employing established musical techniques to link the music with the lyrics and provide a heavy as Thor’s hammer weight to their album. It would definitely appeal to fans of Viking metal, but as they’ve got so much more going on, ‘Allfather’ can definitely fall under a number of categories and offer something to a wider metal audience.