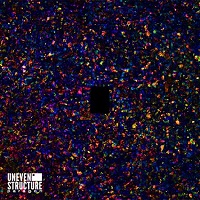 If the internet is to be believed, French progressives Uneven Structure are currently held in high regard by djent aficionados. Since forming in 2008, they’ve released two widely praised albums and built up a formidable reputation touring with the likes of Chimp Spanner and Tesseract. Their debut full-length, ‘Februus,’ was so well received that back in 2017, Heavy Blog Is Heavy named it as the greatest djent album ever. Their third release ‘Paragon’ will no doubt continue that upward trend and satisfy their growing fan base all over again, there’s no reason to believe it won’t be anything but another success.

It’s also staggeringly dull and an absolute slog to get through. That might be more our problem than theirs, but good heavens it is boring. If you’re a fan of the aforementioned bands and haven’t listened to Uneven Structure yet, we’d definitely recommend checking them out as you’ll almost certainly relish every second – but for us, ‘Paragon’ just didn’t click.

For one thing, it doesn’t do enough to distinguish itself from the increasingly crowded scene it calls home. There are syncopated rhythms, ambient guitar effects and elaborate melodies aplenty, all-topped with air-raid siren vocals that don’t so much reach the high notes as invent new ones. There are stomping, mechanised breakdowns cropping up and a few destruction-derby vocals to get the moshers going, but they don’t have enough personality to stand on their own. They could be mistaken for Periphery, Monuments or a dozen other bands.

Plus, there’s an almost total absence of hooks. None of the choruses stick in the mind and by the time a track has finished, it’s impossible to remember much about it. Technically proficient songs played by phenomenally talented musicians? Oh most certainly. But try humming any of them even five minutes after the album’s finished and you’ll draw a blank.

And yes, it’s well established that crafting four-minute pop-rock isn’t what djent is all about, we get that. It’s just that Uneven Structure are so smooth and clean it’s impossible to get a grip on them. It’s meticulously crafted and hours of work has clearly gone into this to make it the most finely tuned machine possible, but it’s not exciting and strangely inhuman. Even at their most emotional, they’re cold and distant, it feels like it was written by algorithms.

This could only too easily be a case of them being a phenomenal band but where the promo has been sent to the wrong target audience. Tech Fest attendees will adore this, PHD students will find enough material to dig through for years and fellow musicians will most likely be blown away, but right now it just sounds like Meshuggah fronted by Walter The Softy. Chances are we’ll have a veritable avalanche of hate mail headed to the Über Rock inbox following this and truth be told, it might even be justified. This is probably amazing, but we don’t get it. Sorry.