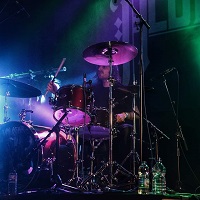 It’s something of twist on our ‘Über Rock Introduces…’ feature, as this edition features a band with whom we have been more than familiar for quite a number of years now… but that’s exactly what we have here with the phoenix like re-emergence of Alunah! Since the departure of founding vocalist and guitarist Sophie, Sian Greenaway stepped quickly into the void left and the sound has blossomed from a female-vocalled Black Sabbath into a groove ridden stoner monster.

I caught up with founding member and drummer Jake Mason to talk about their evolving nature, the impact Sian has had since joining and the band’s changing musical approach… So, I guess when it comes to a reintroduction, we should start where the band previously left off and Sophie’s departure: was it sudden or something that was coming to a head within the band?

I guess at the time it was a shock, seeing as that album had only come out a couple of months before we knew. But on reflection it was probably on the cards. Life takes people in different directions I guess!

How quickly did Sian come to your knowledge – did you already know her and her abilities?

That was the amazing thing really. Once the rest of the band had decided what we wanted to do a friend of the band forwarded Sian an ad we had put out and along she came. We didn’t know of her previously, so there was a fresh spin on things right from the off.

In terms of the sound, you’ve certainly undergone a change. Was this as much due to the change of vocal styles between the two as much as losing the extra guitar?

I think we did the last shows with Soph in July, [and] Sian was with us by end of September, from memory.

Hmm… nothing has really been that much of a conscious change really. It’s just what happened naturally. Sian came in , and the first job was to continue and finish the Solennial tour seeing as that album hadn’t long come out. And with us having one guitar in the line -up , it gave the bass much more room to push through, which I guess you could say carried into the writing for ‘Violet Hour’.

Vocal wise… Sian just deals with what’s in front of her really: old material, new material… she can carry it all off – though, like I say, there’s always going to be a new spin on things

With the newer material and with Sian joining, does it feel like a natural progression – the upheaval aside – into ‘Violet Hour’ from your earlier, more doom-riddled tracks into that slightly more groove-infused sound you now own live?

Yeah, very natural. I mean there is an EP between the two albums which maybe bridges the gap a little. But really it was just a case on rolling onwards with fresh enthusiasm. Sounds contrived to say but nothing was really that planned, we just wrote what we wanted with the personalities in the band. It was fun, and I can hear that enjoyment when I listen back to the album.

So maybe the introduction of Sian gave you fresh impetus to carry on forwards?

Has there been a change in influences since Sian’s introduction to the band, maybe leading to the earlier mentioned sonud change?

Yeah, I guess. Sian has her favourites that she listens to, some of those cross over in to the rest of the band’s listening, some don’t…but then that’s the fun of being in a band really. Everyone’s welcome to bring their own influences to the table… we know between us when it works and when it doesn’t. There’s no personal ego of “you must listen to this now” or anything, and we all have a mutual ground of stuff we do like.

Do you think her approach suits the newer sound more and maybe her stage presence, being more free to move around more without a guitar and such?

Yeah, I guess. I mean she didn’t really have much trouble in pulling off a set of old material. To see someone go from having no to little previous stage experience to the confidence and ability she displays is pretty amazing to watch. But then once she could put her input into the writing as well I suppose she could really go out and put her take on things. And like you say, not having that instrument really allows her presence to come to the fore.

I think I recall Sian saying you guys stick to the new material in your live sets now, rather than mixing the eras, when I spoke with a couple of the band at Heavy Psych Sounds Fest, just before the current pandemic erupted. Was it hard to close the door in that way on your older material?

Yeah, that’s right. It’s pretty much all ‘Violet Hour’ material now. It wasn’t really so much as us closing the door, in that 50 per cent of that previous line-up is still in the band and we contributed a lot to it so we’ll never feel disconnected from that material. But, in terms of set list and moving forwards, this is where we are now, it’s what all four of us enjoy playing and we believe it makes for a very strong Alunah set. Again, all very natural really

Do you have ideas for another album already, or is it a bit soon yet to go there?

There’s a couple of ideas floating around. I think we played a track not on the album at the London show you mentioned. Predominantly, though, the focus is to carry on touring the album…  when circumstances allow us and everyone else to tour, that is!

I think the ongoing pandemic is hitting everyone hard at the moment! How has the response been, both critically and from the fans, since Sian joined?

Yeah, it’s true! Response wise, I mean Sian has been in Alunah two and half years-ish now, and it’s pretty much been good will, support and positivity across the board. We have a new label, booking agent… and the reaction to the material live really makes it a pleasure to play. And the tours we’ve done with Mondo Generator, The Obsessed and the festivals have been fantastic, which ironically makes this “not playing” situation at the moment even more frustrating. But hey…

Speaking of the new label, how have things progressed so far with Heavy Psych Sounds? You’ve been with the likes of Napalm and Svart before, how does it compare from an artist point of view?

Heavy Psych are great. The big thing for us is communication….and they are always there to answer questions. Everything has been transparent, and we couldn’t have asked for much more tbh. Plus we get to call the likes of Brant Bjork, Mondo Generator, Nebula and the like label mates which still makes us smile.

How hands on are HPS with your recording process? Do they get involved or leave it to you?

It was all very much left to us. There seams to be a real mutual respect. Lots of communication along the way re release dates, promotion and what have you but it terms of material it was very much down to us.

In terms of pushing forward, is there a five-year plan or similar for you guys or is it more spontaneous than that?

Funny you should say that. Personally, I used to always have five-year plans and what have you in my head, [but] I quickly learnt that those kind of things don’t really don’t work out in this area of life. There’s definitely a lot more of a spontaneous attitude in the band these days, is there any point in being in a rock band if you constantly dither and question yourself ? We just take it one album at a time really. More than anything it has to be enjoyable.

What songs do you see as staples of your live set?

Hmm. That’s tricky. I mean as the set is based around ‘Violet Hour’ it’s hard to say. Favourites kind of change weekly. We haven’t played Lake of fire yet live, and I know we are really excited about a new track not on the album called ‘Dead Woman Walking’ so things could always flip next time out. For the time being I guess the boring answer is the title track, ‘Trapped and Bound’, ‘Dance of Deceit’…though this answer could change next week to something else off the album!

One last question for you then: if you could pick any song in history to have written, which would you pick and why?

Jake: Could it be anything else other than ‘Black Sabbath’, really? (If Kiss ‘Let’s Put The X In Sex’ isn’t available as an answer, of course!)

Here’s to Alunah finally getting to finish the tour… hopefully in the near future!