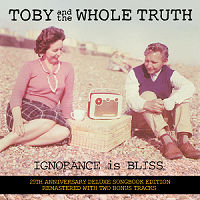 There is a saying about some things being better left unsaid. Equally, there are some things which, once said, should never be repeated. And that latter point, to be brutally honest, is the crux of my issue with this, the first of Jepson’s post-Little Angels album, which has now been remastered and is about to be re-released to coincide with the 25th anniversary of its initial appearance.

To put ‘Ignorance Is Bliss’ into context, Little Angels were once, to use a perhaps now non-PC analogy, the “great white hopes” of the ÜK rock ‘n’ roll industry, threatening to take on the likes of Def Leppard for their stadium-stealing crowns: but, despite growing success, it all went wrong, and after ten short years and four increasingly successful albums, the band found themselves riven by internal division and, in July 1994, played their premature farewell on one of the most acclaimed stages of them all, the Royal Albert Hall. Around a year later, ‘Ignorance Is Bliss’ surfaced: an angry album, and one which was very much a commentary on the times in which it was created, reflecting its author’s views on the demise of the band with which he had threatened to take on the Überverse, his relationship with his boyhood friends (and now former bandmates) – and the music business as a whole – the latter part of which Jepson has more or less turned his back on over the intervening decade, choosing to plough his own furrow and stand up for his own fiercely independent beliefs, for which, of course, he must be applauded.

But the problem that I find with ‘Ignorance Is Bliss’ is exactly in its background – and, primarily, the fact that things have moved on, quite substantially, since its initial release. Jepson has reconciled, to a degree, with his former bandmates, not least guitarist Bruce John Dickinson, with whom he has worked on various projects to help promote and promulgate the talent of emerging musicians. It is against this background that even song titles such as ‘Some People Are More Equal Than Others’, ‘Better Off Without Me’ and ‘Open Your Mind’ sound like bitter indictments of the circumstances. However, at the same time, along with the likes of ‘Save Me From Myself’ and ‘Out Of Sight Out Of Mind’ they are also cries for help, for personal salvation, coupled with more optimistic messages of a brighter horizon, one bringing positivity out of perceived adversity, as exemplified on the likes of ‘Get Your Feet On’.

Don’t get me wrong. ‘Ignorance Is Bliss’ is not a bad album. It is a very worthy one in its own right. It has some great songs, most of which have been reference already. It reflects the nascency of a songwriter escaping the “rock star” mien, finding his feet, and his own identity, outside the comfort zone of having other musicians and composers off whom to bounce. But it is an album that is – or, rather, was – very much of its time. It is the voice of an angry young man transformed into that of a more mature, but still passionate, middle-aged one. It reflects a voice which still needs to be heard, but one whose messages have changed in the interim. It is an album that is of its time, but, on further reflection, holds a spark of relevance accentuated by the faithful remix which makes the sound fresh and modern, albeit possibly giving the final effect of papering over the cracks of past injustices…