The Sensible Gray Cells – ‘Get Back Into The World’ (Damaged Goods) 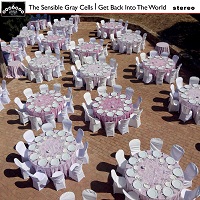 The first thing I heard about Sensible Gray Cells was actually from a publicist for a different band, albeit with a fair amount of crossover, as bassist Paul Gray also wrote and performed on Professor and the Madman’s ‘Seance’, with two of those involved also mixing this Sensible Gray Cells release. Plenty of opportunity to have my interest piqued, then! SGC had released one previous album, ‘A Postcard from Britain’, released seven years ago which edged more towards a vintage psych-rock song – would this be continued in the new release?

In honesty, it is definitely a similar vibe to the previous release, though the – somewhat expected – feel of The Damned still pervades this. This is not a bad thing in the slightest, as while tracks such as titular ‘Get Back Into The World’ definitely hark somewhere between the new romantic era of The Damned and their previous more psych-rock, we also have ‘Jam Tomorrow’, which just oozes that classic psych vibe, similar to ‘In-a-gabba-de-vida’ or ‘House of the Rising Sun’ in its approach, though with a musical interlude midway that feels like something more akin to a shamanic ritual, with tribal style drumming mixing with something a bit more sampled and distorted through the rest of the song.

There are definite nods to the history of the various members, as already mentioned, as the likes of ‘So Long’ would definitely fit in amongst some of the earlier The Damned hits such as ‘New Rose’. While not as visceral and raw in its approach as those times, Captain’s almost sneering vocals convey a quite punk spirit through a lot of the lyrics – which again, while not a surprise, is something that is both a welcome addition and something that adds more depth in its attitude. Tracks such as ‘Stupid Dictators’ quite obviously refer to a certain American politician, though with a nod at someone closer to home at the same time, with this righteous fury being funneled in such a manner that you can’t help but feel compelled to sing along, more protest anthems for generations both old and younger.

‘I Married A Monster’ is definitely closer to their previous release in its tone and also one of the preview singles released to promote the album – singles that have been chosen well to try to encapsulate the differences that run through this album without actually detracting from this sounding a whole, a complete body of work – with both this and ‘You and Me’ almost sounding like if The Damned were covering the more psych-orientated era of The Beatles, something they achieve with aplomb. There is even time to give Paul Gray his first taste of lead vocals on ‘What’s the Point of Andrew?’, though thinking of any famous British people with that name will give you a very easy insight into quite what this track is about!

It’s notable that the vocal melodies and the music harmonies are present throughout, weaving a complex soundscape that encompasses so much, no matter which of their sounds they are performing on that particular track. Album closer ‘Another World’ even brings in an almost space rock feel at times, strafing between a sound I would attribute to ‘Hassan I Sabha’ by Hawkwind and the Beatles style approach previously mentioned. It’s overall an album with rich, complex layers that is an absolute credit to everyone involved, in terms of the songwriting, the lyrical approach and the production that create and overwhelming atmosphere that you just cannot help but be enveloped by.