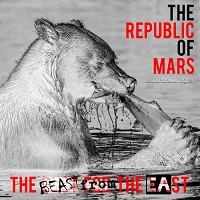 The Republic Of Mars – or ‘Respublica Mars’ in the literal translation of their name – hail from the city of Vladivostok, perhaps best known to us of a certain generation as the home base of Russia’s Pacific fleet during the Cold War. Their geographic origin provides the apposite title for this, their first English-language album, as the name of their native city itself commonly translates as “lord of the east”.

Now, I mentioned that this is the band’s first English-language album. All of their releases, since they started as an internet-only project back in 2014, to date have been recorded exclusively in Russian. However, as they now seek to spread their wings internationally, they have brought in singer Rob Lundgren, lead vocalist with German/Swedish melodic metallers Mentalist but perhaps better known for performing covers of metal songs on his YouTube channel, to translate (I assume, given the lack of information available about the project) their back catalogue for the English-language speaking parts of the rock ‘n’ roll Überverse.

With the album being something of a mish-mash of styles, from the industrial groove metal inflected opener ‘Winter’ through the obligatory classic rock power ballad ‘Losing You’ to the lighter-waving alt-rock mien expounded by the likes of another mob with the red planet in their name, Lundgren’s recruitment is definitely a positive move, as he is the one consistent factor throughout, his impressive range helping to carry the album’s multiple mood swings with alacrity and a sense of easy transition.

That’s not to say that, musically at least, this is a bad album. Because it is not. The songs are well crafted and presented, and each of the musicians delivers confident performances, especially drummer Igor Kryshko, who is very much from the “less is more” school of percussive technique, as clearly demonstrated on two of the album’s stronger tracks, the back-to-back duopoly of the slide-driven ‘In The Teeth Of The Enemy’ and the superior of the two ballads, ‘Far Away’, both of which also feature two of Dmitry Cherny’s best guitar performances.

Ironically, this CD (or, more accurately, three copies of it) landed on ÜRHQ’s doormat just a few days before Eddie Van Halen’s death. I say that because the final track is a perhaps somewhat prophetic cover of ‘The Dream Is Over’.

Setting the stylistic swings aside, ‘The Beast…’ is a worthy collection which serves as a tasty appetizer for (hopefully) more to come as its producers seek to break out of the frozen expanses of Russia’s easternmost outpost and into the warm afterglow of wider international attention.