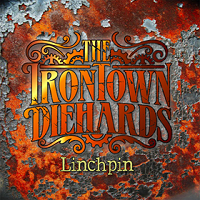 As I mentioned in a review of another Northern Ireland band just last week, it is a generally accepted fact that second albums are extremely difficult beasts. A band spends years crafting their sound, honing their material to make the most impressive first impression they possibly can, and then feel pressured into maintaining the momentum by immediately getting back into the studio. However, in common with their countrymen Conjuring Fate, The Irontown Diehards have waited quite some time following up their self-titled debut offering – more than four years in fact.

Über Rock was privileged to be the first website to receive a copy of the album, when singer Phil Dixon handed over a precious advance copy as we sat outside Belfast’s Voodoo bar ahead of their recent “comeback” gig. The charismatic frontman “warned” us that it sounded somewhat different from their aforementioned debut offering: but, I big to differ with the man in the trilby, as, while in many ways he is right, there is still that distinctive Diehards sound that makes the sound instantly recognizable to long-term followers of the band, such as myself and DQ.

Kicking with the power and glory of ‘Livin On’, there is an immediate statement of intent, which carries through into follow-up and lead single ‘Ride’: there is a dense crunch under-pinning the sound which drives the songs forward with a convincing thump. The rhythm possesses a darkness which hints at a swampy groove while also possessing a rich vibrancy which exudes pure, unmitigated energy, while it is also immediately obvious that guitarist Andy Baxter has taken a deliberate decision to ease back on the histrionics, his solos remarkably restrained and more integrated into the album’s overall shape and sound – not that he’s not afraid to let go, especially as the album progresses, but there is more a feeling of his fellow musicians being allowed to stretch themselves more and a maturity of approach, coupled with a level of respect. that the album deserves.

While possessing rich layers of atmospherics, especially in Mark McCallion’s excellent blues/funk-infused based lines, it could be argued that ‘Linchpin’ is also a lot heavier than its predecessor: as I’ve said, a lot of the guitar “wankery” has been eschewed, but what remains is a sense of emotional clarity that helps the album punch with a combination of alacrity and fulfilment that rewards more and more with repeated listens. The overall result is an album which is as complete as any group of artists could wish from an endeavour into which they have poured their hearts and souls. Quite frankly, it is a stunningly impressive album which deserves the fullest attention, and support, of every genuine rock ‘n’f’n’ roll fan in the Überverse.