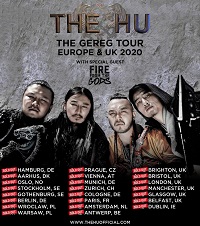 The HU have been causing quite a stir over the last couple of years, enjoying the fruits of a pretty damn successful social media campaign that’s launched the likes of themselves and Bloodywood into notoriety in the West. As a big fan of odd leftfield music, I couldn’t resist getting myself along to this.

After an almost instant sell out show at Manchester’s Academy 3 and possibly the most packed tent I’ve ever seen at Download festival (alongside Jinjer), they’ve returned with an expansive ÜK and EU tour and have sold out almost every date, and these are not small venues! The Ritz in Manchester has hosted no small number of well-known acts and even just walking to the venue, the queue was absolutely gigantic. On this tour they bring with them, Fire From The Gods, who I’ve not actually had chance to check out properly but I think given what The HU are like, I can see them being similarly odd.

Walking into the venue there’s what appears to be a large spear with a battle standard attached to it in the middle of the stage, probably a stage prop of The HU, sadly I didn’t get to actually “see” them at Download as despite being in the tent, The stage was on an incline and it seemed like the crowd was made up entirely of Basketball players.

Fire From The Gods take the stage with a sort of hip-hop intro before their absolutely hench singer walks on and the music kicks off in earnest and so far they seem a bit similar to Killswitch Engage which is pretty cool. Something definitely seems off with the sound balance though which is a bit disappointing, the rhythm guitar doesn’t come through very well and the bass, while you can feel it, doesn’t have a lot of clarity.

A bit further into the set and the balance seems to be getting better and I can hear the guitars and bass better which is good, the songs definitely come across as a lot more full in their sound. The mixing in of hip-hop elements into their songs works quite well and flows in and out of them without being jarring. As they progress through their show, they’re definitely sounding far better, you can see the crowd is warming up to them and getting more into their groove laden style.

Now that the sound issues are out of the way, the big fat chunky riffs they’re kicking out sound pretty damn fantastic. On the whole they did quite well despite the sound issues they had at the start and eventually gave way to a pretty thunderous sound that really won over the audience in the end, plenty of movement and bobbing heads.

With a slight delay, The HU appear and begin their Mongolian folk tinged rock to the sound of the crowd loudly chanting “Hu! Hu! Hu!”. Fronted by the main melody makers sporting folk instruments that I don’t know the name of myself, the most peculiar of them is the mouthpiece type which provides a rather distinct “boing” sound similar to when you pluck a stretched elastic band.

Every part of this band is designed to create some sort of layer, even down to the vocals which alongside providing the lyrical content utilises throat singing to accent the ever-present drone in most of their music. To give a bit more oomph to the live show, they’ve also got a guitarist and bass player alongside them, which thankfully don’t detract from what the rest of the band are playing.

With bands like this, I feel very privileged to be able to hear what they’re touring and had it not been for the internet, I probably never would have learned of them. As I stand here typing this, I’m quite amused by the response of the friends I’m with that have managed snagging a ticket, theyre absolutely loving it but the look of mild bewilderment is what I’m enjoying seeing. The Hu do a very interesting fusion of the folk music of their native country with western rock sensibilities, the wide appeal of this sort of thing is evident in the varied people in the audience who go from full on battle-jacket metalhead all the way to dreadlock sporting folkies. They’re the sort of musical act that wouldn’t be out of place at Cambridge Folk Festival despite having a slot at Download festival last year.

As a final note, if you don’t know what throat singing sounds like, either get on YouTube and check it out or give The HU’s album, ‘The Gereg’ a listen. There is a haunting quality to the sound of it, especially when you really hear the high-pitched harmonics that accent the low drone of the voice. The HU are an immensely interesting band and I do hope that they’re a persistent part of rock and metal music for years to come as it makes the scene that much more interesting.