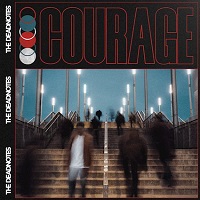 This album takes me right back to the mid-2000s with emo/indie rock bands like Dashboard Confessional. While back then the market was flooded with bands in the genre, these days it seems that there are few doing it. Even less doing it in the same classic style as back then and even fewer still doing it well. Five years ago, I might have said that it was too soon for a comeback of the genre however these days I think it is a good time to reintroduce the style. Both for the new generation and to kick our generation right in the nostalgia. The real question is how does The Deadnotes fit into this reintroduction? As usual, you gotta wait till the last paragraph for my final verdict. First, let us talk about the music.

This is a very soft album. It is like a conversation. The composition does not ever get too heavy, but it also is not boring. There is that oddly optimistic tone in what otherwise would be a rather sombre tone. Everything is done in that classic style with a slightly overdriven but still rather clean guitar tone. This is complemented by just enough drums. They don’t take centre stage, just drive the rather chill tone of the music forward in that same sombre yet oddly optimistic way that is a staple of the genre.

The vocals are much the same as the music. It is like talking to an old friend. Sure, the subject might be sad but it is so good to see them after all these years. While this is the first time I am ever hearing this band I still get that feeling like they were a part of my emotional makeup back then in those fundamental years. This is something that I think it difficult to achieve. It is like they were always supposed to be there in my memory. This made every song feel familiar even when I had not heard it before.

So back to the original question. Is this a worthy album for a resurgence of the genre? I think it is. This is absolutely something I would have listened to back then and it something that I will listen to now. I think what The Deadnotes have made here is a perfect album to introduce a new generation to the style and I could totally see this being played over the radio. If you like the genre and wish for a resurgence or if you have never heard it before, this is a great album to start with.

‘Courage’ is released on 14 February. You can get your copy HERE.