ALBUM NEWS: The Black Hands to open their ‘Electric Premier Theatre’ in May 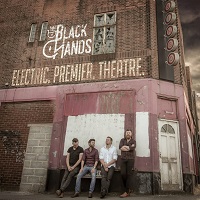 Almost a decade after they first formed, Chesterfield blues-rockers The Black Hands will release their debut album, ‘Electric Premier Theatre’, on Friday 17 May.

It is available to pre-order NOW.

The Black Hands have actually been around since 2010 but have been ‘derailed by life’. A mixture of marriage, births and unfortunately bereavement all colluded at the wrong times.

“This album has been such a journey for us, it puts Guns N’ Roses’ ‘Chinese Democracy’ to shame, it has been that long in the making. Some of the songs started gestation some eight to nine years ago, so you could say that they have stood the test of time and critique to be on the album.

“We are immensely proud to set our babies free for the world to enjoy. We built our own studio and started on an old eight-track and have upgraded over time but that core, authentic, analogue sound is at the root of who we are and what we do.

“The album title is a play on the name of an old local theatre (the Premier Electric Theatre in Somercotes) that was been part of our lives as kids and has also stood the test of time and gone through many incarnations, so it kinda connected with us. The building is still there, though not been used in years and so we wanted to pay homage to it by including it on the album cover.”

The Black Hands play the TMR Rockfest at The Patriot in Crumlin, South Wales on Friday 19 April and the RoadRage Fest in Sheffield on Saturday 20 April.