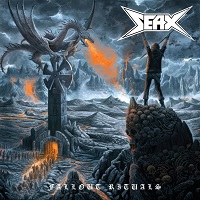 Massachusetts based four-piece Seax are back with their fourth album. Formed in 2009 with the intent on bringing a classic metal sound to the masses, the band set about making their name through DIY hard graft and touring. Their debut release ‘High on Metal’ set the tone for the band and their following releases built upon the solid foundation work. 2019 sees the band honing their high-octane speed metal style further with ‘Fallout Rituals’. What can they offer up and will the album further cement their place in the metal halls?

‘Fallout’ opens things up and as an instrumental at only a minute twenty-eight, firmly establishes the band’s sound for the listener.  With a powerful drum and distorted guitar chord intro that builds into a wall of sound, we’re introduced to duelling guitars and a building metal soundscape. It’s a track that echoes the early eighties NWOBHM sound before launching into a break neck pace for ‘Rituals’. Undeniably speed metal, ‘Rituals’ features a relentless rhythm section with attacking guitars and soaring vocals. All the classic metal elements are here from the furious drumming to the tremolo picked guitar work. There’s a call and response layout to the vocals between the higher and lower register parts which adds an extra texture. Despite the break-neck pace it is highly infectious and works well into ‘Killed by Speed’.

Representing the current single release off the album, ‘Killed by Speed’ plays out exactly as you’d expect with a title like this. A wall of sound provided by the full instrumentation going all out with high powered drumming and ferocious guitar riffs. The outrageous high register vocals within the verse sections are well balanced out by a full band lower register response in the chorus. It’s clear why this was a single selection as it really does showcase what Seax are all about. All in speed metal right from the get-go. ‘Bring Down the Beast’ features one of the catchiest intros on the album with a lead guitar melody line taking charge.  The by now well-established wall of sound kicks in and allows the vocals to sit clear of the mix on top as the listener is pulled right into the full-on thrash sound.

Tracks like ‘Interceptor’ and ‘Wings of Atomic Death’ echo more of the early eighties NWOBHM sound with their instrumental delivery while the vocals take on more of the high pitch aggression of early speed metal.  Leading into the latter part of the album, the music retains all of the same themes and techniques that have gone on so far. There’s a lot of power laid down within the tracks, however the quality musicianship ensures it is delivered with a high standard coherence. The mix also enables each instrument to be clearly defined without blurring which would be all to easy given the high-speed delivery.

The music of Seax retains a level of infectiousness right up until album closer ‘Born to Live Fast’ with it’s catchy, easy to sing along chorus lines it will surely be a favourite on their live shows. If there’s some criticism to be found within the album it could be said that there are not many dynamic changes either within the individual tracks or across the wider album. As mentioned above the mixing of the music stops any muddying of the delivered sound, however, with the relentless pace of the music barely taking any pause there is an element of ideas being repeated from track to track.

With that being said, it’s a great example of how great speed metal should be played. The fact that there is no respite until the final note of ‘Born to Live Fast’ means that the album never loses it’s focus. It’s a straight up, honest delivery of a band doing what they love to do.  Seax have created a no holds barred speed metal attack with ‘Fallout Rituals’ which will be sure to pull the listener in with its catchy riffs and hooks and leave them with a sore neck for days.