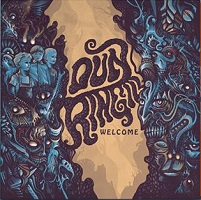 As debut albums go, this one from Dun Ringill, who feature former members

of The Order Of Israfel and Doomdogs among many other bands, is actually quite impressive. Featuring a sound that combines Scandinavian folk with a doom rock sound – a certain level of heaviness without going full out into it, as many other bands seem to be at this point. While the members know each other from other projects, that doesn’t always translate well into bonding musically – something I had been wary of prior to my first listen of this release.

I have to admit, it took me a couple of listens to fully get into this. Some parts of it were fairly immediate, while it took four or five listens to get to grips with some of the more folk orientated aspects of some of the tracks, as the layers have a level of complication to them from the off. Add in vocals done in a slightly different style than you would expect from this style of release and the thought process has to change a bit to acclimatise to the different nature of their sound. There is almost a proto-metal hint at times, along the lines of Iron Maiden’s 1969 release ‘The Voyage’ (the original Iron Maiden – not the one we all know and often love now!) which actually sits quite well alongside the rest of their material.

Mid-point track ‘The Door’ is one of those that is quite immediate, standing out to me on the first listen through and onwards, perhaps a big reason for it being one of the singles and music videos from the album. There is more of the doom rock sound to this and a bit less of the folk influence, making it more accessible to a more general rock or metal fan than the majority of the other tracks, helping those less focused on the dark Folk side to properly get in to this release.

Overall, it’s a pretty good release. It is not an immediately enjoyable album in the main, so will take a few listens to get properly into their groove, but it is highly enjoyable once you properly have done so. A few bits of strangeness apart, there’s enough to appeal to a general rock, folk or doom fan, though those whose tastes sit closer to the mainstream of each may struggle with the level of complexity of this record, though its position more firmly between the rock and folk sectors may make it less problematic than if they had gone for more of a heavier doom end feel.