Sons Of Apollo – ‘Live With The Plovdiv Psychotic Symphony’ (InsideOut) 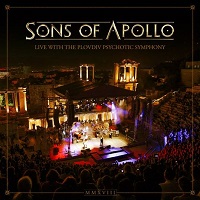 I’ll start this with an admission – I made the mistake of only listening to the audio of this a few times, prior to watching a playthrough of the DVD. This is most definitely a mistake, as the extra context and camaraderie between the band members that you see from the live recording make a big difference. I normally hate live albums, but having taken in the Manchester leg of the same tour live, I was aware of just how good these guys were, so the chance to relive that memory, along with some added extras, made me journey into somewhat unfamiliar territory.

For starters, none of these guys should need any introducing. A prog supergroup comprising people that make a new supergroup every year (or so it seems), given the level of talent that each possesses individually means that their singular talents are always in demand. Their first song in Manchester, as here, was ‘God of the Sun’ and from the first guitar intro, I was hooked. Both watching and listening to this drew me back into that very, very happy place. While this part of the setlist is not quite the exact same as when I saw them personally, this live release encompasses two sets from the band, explaining the changes made to the set.

The first part encompasses the tour and the sheer sonic excellence that is predominantly their own songs, along with some Dream Theater covers – unsurprising, given Mike Portnoy and Derek Sherinian’s musical heritage there – thrown in for good measure. Six of their own tracks feature here, with the added bonus of a pair of Queen covers for Jeff Scott Soto’s solo and the Dream Theater song ‘Just Let Me Breathe’, while covers of the theme tunes for ‘That Metal Show’ and ‘Pink Panther’ work well alongside the tracks played either side. The production values are incredible, with the echo of the roman amphitheatre audible on the quieter parts just audible, enhancing the effect of actually feeling like you’re there – one of the big reasons for my opening bit about only listening and not watching it being a mistake. The audience applause feels like it is all around you, making you feel part of everything going on, further enhancing the experience.

On to part 2, then, a covers set with a symphony orchestra backing and we find the reason for the slight deviation from the previously fixed setlist – Labyrinth was to be played halfway through the second half of the set with the orchestral backing – an absolute treat indeed! Coming out to a covers set and launching straight in to Led Zeppelin’s ‘Kashmir’ would be a hell of an ask for most people, even those that are highly talented, but Sons of Apollo perform it like it’s their own song they’ve played for years, showcasing quite how phenomenal their talent is both collectively and individually. The solo spots are all performed to an unrealistically high standard, which sounds like an oxymoron due to their doing so – more a testament once more to what is possible once you hit such a zenith of ability.

In short, go out and buy this. If you like Prog, if you like classic/hard rock, AOR or anything similar, there is so much crossover appeal that there is something you will enjoy. What are you waiting for, the link to buy it is just below!