Sometimes We Make Music – ‘Trail Of The Fallen’ (Self-Released) 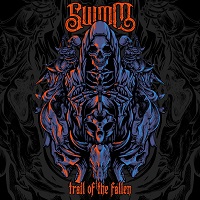 Buckle up because this is a fun one. With a band name like Sometimes We Make Music you know these guys have a good sense of humour. Based on that assumption I’m not surprised that the resulting album sounds like a collection of what the band loves to play. The whole thing sounds like they are having the time of their lives and if they are having fun it makes sense that the final result will also be a lot of fun.

The vocals are mostly consistent within three main styles you have this heavy distorted growl that is wonderfully contrasted by some almost softer vocals as well as some chanted vocals. These three styles are woven together perfectly to create an experience that never gets old. The main exception to this is ‘Queen Anne’s Revenge’. This track feels completely different than the rest of the album and I completely love it. It is a lot of fun and adds a nice break from the otherwise rather serious album. It is a welcome break as well because the following track ‘Demon’ is pretty emotionally intense and truly beautiful.

The music is also wonderful bringing in many different levels of intensity. Ranging all the way from fast and heavy with a double kick peddle to a softer rock style then over to soft piano music. With the notable exception, once again being ‘Queen Anne’s Revenge’ introducing a flair of pirate metal. There are many levels to the music even within a single track. It is always evolving into something new and is a journey from start to finish and one that I don’t think you will forget quickly.

Like I said at the beginning I think the main point of this album was fun and they achieved that without question. Along the way though they also managed to make something that has deep emotional intensity and passion that can only be done well when the band truly loves what they have done. The passion here shows in the final product and it is well worth it. I think this album is a must-have in your collection and I found myself going back to it often over the week not because I had to listen to it for the review but rather because I simply wanted to hear it again. Pick this one up. You will not regret it.