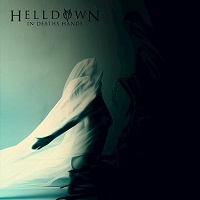 You know that Prince Harry fella? Nice guy, war hero, just moved out of his mum’s. Well there’s been rumours online that he’s a closet metalhead and digs Power Trip and Municipal Waste. If that’s true, he could do a lot worse than checking out ‘In Deaths Hands’, the new EP from Welsh thrashers Helldown. It’s a gritty and authentic four tracker, full of mosh-inducing songs and should provide a nice outlet for any anger he might be feeling next time the UK’s impartial media claim that buying avocados means his wife is basically Hitler.

These lads have been around for six years and this is only their second release, so they’re right at the start of their careers. Followers of the UK thrash scene might be expecting them to resemble the likes of Acid Reign or Evile, but curiously the first band that springs to mind are Exhorder. Like the New Orleans “almost legends,” Helldown have some serious groove and the bass-heavy riffage makes them sound good and chunky.

Opener ‘The Unnamed’ (which was featured in the most recent edition of our Singles Club) is a nice little introduction, whip-crack fast, antagonistic and daring you to look at its girlfriend again. Things really come to life with ‘Mortal Shell’ though, a three-minute barrage of high-speed metal that comes with a good old-fashioned chorus, perfect for bellowing out in fury when the grouse shooting gets interrupted by Express journalists.

Our Harry’s gonna love ‘Heretic’ and ‘Flames Of Heresy’ too, both of which are straight-down-the-line headbangers. The kind that make you want to say “fuck it,” turn the hose on all the paparazzi camped out on your lawn and move to Canada. Helldown don’t break the mould but their archetypical thrash is really quite enjoyable fight music. They’ve already shared stages with Phil Campbell and Toxic Holocaust, so hopefully this EP will give them more ammunition to battle their way out of the underground. Good stuff, one approves.