It’s Halloween. The night when the ghouls come out to play. And the blood-soaked schoolgirls. And the bananas (although, to be fair, that’s most nights in Belfast city centre!). But, what better night for Belfast resident horror punks to launch their brand new, ÜR-approved, second album, released on this very same day? It’s also “Freedom Night”, the first on which the remaining restrictions on Northern Ireland’s pubs and clubs have been lifted – just a full four months after the rest of the Über Kingdom – and so the whole place is going buck daft with excitement and for the first time in seemingly forever we are greeted with the sight of a queue stretching halfway down the street for this, the first full-capacity, fully-standing gig to be held in Belfast since March 2020. 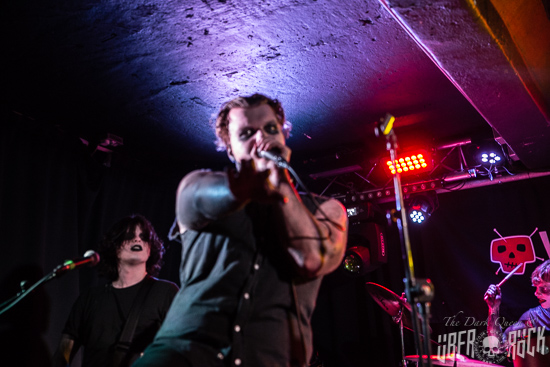 Opening this evening’s proceedings are the only band on the bill we’d never heard of, never mind seen – but this is hardly surprising as it turns out that this is EB And The Deadlights’ first ever show… well, you could have feckin’ fooled us! The quintet shows absolutely no signs of nerves, and in fact it is a surprisingly confident performance as they rattle through their set of Misfits-style, hardcore-infused modern punk with professional aplomb. The only downside is that, not for the last time in the evening, the mix on the vocals and guitars is somewhat low key, meaning the sound is dominated by the bottom end. Finishing off with the title track of their forthcoming debut EP, ‘Still See Ghosts’, which itself is a big, broiling bruiser of a song, they receive a deservedly rapturous reception: in fact, it seems that EBATD brought their own corps of support, as the audience seems to dwindle somewhat after they quit the stage… 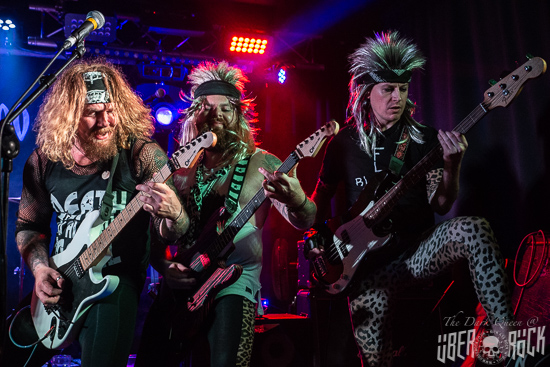 Seeing as it is Halloween, Delusional Silence have entered into the spirit (sic) of the occasion, with all four of the musicians dressed like extras from a Steel Panther video: only vocalist Phil Ashe is not wearing a wig – but then he does have an impressive set of dreads so hardly any additional augmentation… Musically, they have a NWoBHM-inflected, twin-guitar heavy metal approach infused with elements of nascent, old-school sub-thrash, which very much draws on the Iron Maiden school in terms of the length of the songs. They race through their allocated 30-minute slot, with Ashe keeping the spoken niceties to a minimum, allowing him and his bandmates to concentrate on cramming in as much music as possible. The result is another taut and, above all, fun performance from a band who definitely know what they are about live. 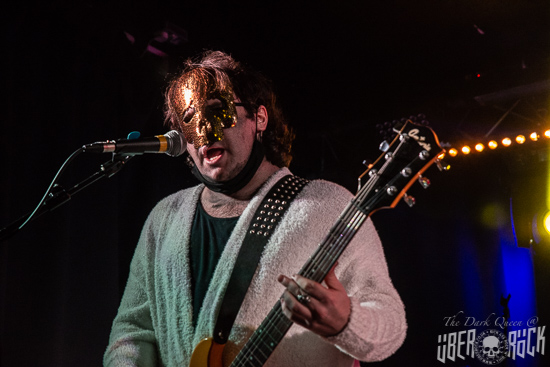 Main support Steven VX And The Arts Rats could be seen as the anomaly on tonight’s bill, with quite a few people not seeming to know what is going on with them, especially with frontman Stevie taking to the stage in what looks like his ma’s dressing gown and bedroom slippers. Yes, things definitely have just got ‘Weird’! Fortunately, I’ve seen the trio before, and so have a reasonable idea of what to expect; and that is noisy proto-punk with plenty of bang, clatter and fizz, combined with shouted vocals, protozoic guitar riffs and thumping rhythms tighter than the just-lifted Covid restrictions. The last third of their set is an amalgam of Misfits covers, in the form of ‘Where Eagles Dare’, ‘Halloween’ and ‘We Are 138’, with the band joined by Ethan and Matt from the Deadlights for the latter two’s rousing finale – even if Ethan doesn’t actually have a mic (which probably is just as well, as he later confessed to not knowing the words). 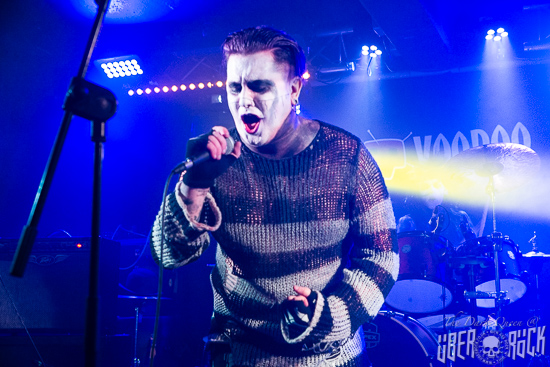 With the smell of face paint and talc (well, I sincerely hope it was talc) still heavy in the gents’ toilet, the intro music hits for this evening’s headliners and ghouls in residence, So Long Until The Séance: well, it wasn’t that long, ‘cos it was about to start… Surprisingly, despite the gig being a virtual sell-out, the audience is still slightly smaller than at the beginning of the evening – perhaps all the teenagers had to leave early to get up for school in the morning! Nevertheless, it doesn’t prevent the band getting a deservedly uproarious response for what could be argued is a double album launch (as they never got a chance to promote their last one, ‘The Mourning After’, as it was released just as the world got all Covidicated on our arses!)

After Mike Van D reminds us that “it’s been two fucking years”, the band get off to a rip-roaring start, even if the technical problems of earlier in the evening are still prevalent – the mix on Mike’s voice is muddy and that on Tommy’s guitar squealy, while the bottom-heavy sound is dominated by new recruit Vaughn Strosity’s nonetheless impressive rumbling bass and the double kick. Nevertheless, new single ‘Carol Ann’ (for which the video has been disappointingly delayed in post-production) is an early pop and really helps to exemplify the band’s use of four-part vocal harmonies, which perfectly match Mike’s great range, which manages to shine through despite the unsympathetic mix. 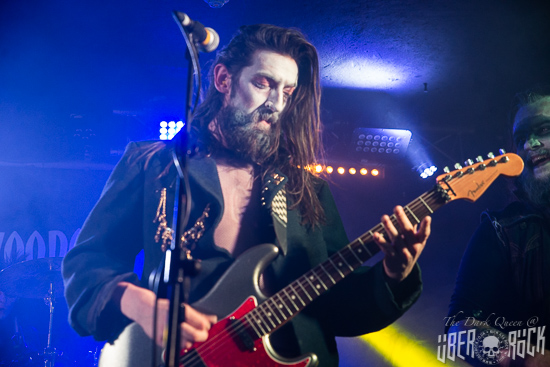 The likes of ‘Beautiful And Cruel’, ‘Necrophiliac’ and ‘These Ghouls’ sound just as impressive live as they do on the album, and have the vast majority of the remaining crowd clapping and even singing along… by the time they launch into another previous single, ‘Spider To The Fly’, even the security staff are moshing along, as the band display both their hunger for and their joy at returning to the stage. They round off with the ever rousing ‘Dead Pretty’ before answering the clamour for a highly deserved encore: hell, they probably would have played all night if they had any more songs well enough rehearsed, but as it was this was nigh on the perfect way to celebrate both All Hallow’s Eve and “Freedom Night”. Congratulations and thanks to everyone concerned for organizing such a great comeback party \m/