So Long Until The Séance – ‘B-Movie Superstars’ (Self-Released) 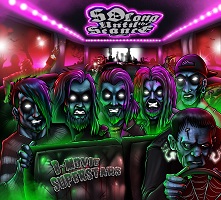 It’s Halloween. Well, almost. And what better way to start our countdown to our favourite day of the year than with a dose of horror-inspired gothic punk rock ‘n’ roll from a bunch of guys who who wear so much white make-up and cover themselves in so much talcum powder that the cast of The Walking Dead look positively healthy in comparison? Oh, and write and deliver pop songs catchier than a dose of the clap in a nunnery? Nope, neither can I? Which is why this second full-length album from Belfast’s residents SLUTS (1… 2… 3… oh, you got it! Grand!) is the perfect appetiser for the ghoulish goings on ahead of us this coming weekend…

Now, regular readers will know that I have followed the SLUTS’ career from the very beginning, seeing them through multiple line-up changes and other challenges, including the Covidications of the past 20 months, against which backdrop this ten-track album was written and recorded (and, yes, with yet another line-up change – these guys goes through more bassists than Spinal Tap did drummers: this one is number four by my reckoning).

One of the rewards of following a band through their career in this way is seeing, and hearing, how they develop and grow – and ‘B-Movie Superstars’ definitely, and defiantly, is a true example of a band developing, evolving and growing, as it is a significant stride forward in terms of the band’s sound and craftsmanship.

Put quite simply ‘B-Movie Superstars’ is a huge album, in every department, from the massively infectious hooks and choruses to the overall sound, which is rich and sumptuous, drawing out every minute detail of the songs. Add in some searing solos, stunning drum work and liberal dollops of beautifully orchestrated gang vocals, and its not long before you’re singing along to the likes of ‘Carol Anne’, ‘Necrophiliac’, ‘Beautiful And Cruel’, ‘Brave The Night… in fact, every song is an instant earworm that roams around your aural cortexes long after the last notes have sounded. Just one word of warning… when you think you’ve got to the end of the CD, you haven’t, as there is a hidden bonus track (previous single ‘These Ghouls’) and a neat little skit which follow, so endure the silence for a few seconds…

Beating in mind it’s title, there is nothing second rate about this wonderful album. In fact, it is very much A-List and an essential soundtrack for this weekend’s revelries… and beyond, of course. So, roll out the red carpet and let these SLUTS into your eardrums, and your life. You won’t regret it. Now, where did the missus hide that black lipstick?