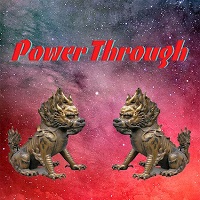 As a teen, I always fancied myself a bit of a skater, even though I was pretty terrible at it… but naturally I also gravitated towards that specific flavour of punk that adorned the soundtrack of many a Tony Hawk’s game, so much so that it’s still a regular staple in my music listening to this day. So, when I stumbled across an album that promised to be classic skate punk from a guitar force to be reckoned with, well, it certainly grabbed my interest.

I’ll admit that the cover from this debut album from Scarlata, ‘Power Through’, did not fill me with a lot of confidence as it looked a little bit like someone had knocked it together in MS Paint under instruction from someone trying to describe the dream they had last night! But you should never judge an album by its cover so I pressed on to find out what musical delights could come from the self-taught instrumentalist on this full length album follow up to his debut EP ‘Metal Baby’.

If, like me, you expect ‘Power Through’ to be chock full of energetic riffs, catchy choruses and bouncing rhythms, then you would be partially correct. The first unexpected surprise is that this album is almost entirely instrumental so while it does nail the catchy riffs, it falls a little bit short of my expectations. Unfortunately, after a while of listening, I realised that without the vocals, this music can get repetitive pretty quickly which is not ideal. Despite trying to ‘Power Through’ to the end of the album, I just couldn’t hack it and it ended up being one of those rare occasions where I didn’t manage to finish the album. The musicianship, however, is still pretty impressive. Especially when you consider that every instrument is played by the same guy!

The album opens with ‘Ch’i Lings Spell’ which blasts off with a pretty powerful riff accompanied by a simple rhythm played at 100 knots. It feels like it’s building up to a killer chorus full of anti-establishment sentiment, but it never comes. It’s like constant foreplay but with nothing at the end so while it’s pretty fun, it just doesn’t quite scratch the itch! But the tables turn later on with ‘Common Ground’ which takes a steer away from the general theme and ends up sounding more like a Sabbath-worshipping track complete with vocals that seem to be influenced by the Ozzman himself that marked an improvement for me!

But overall, I really struggled with this album and just couldn’t fit myself in the groove; but that’s not to say that you won’t. Regardless of my opinion of the album as a whole, I am genuinely impressed that Scarlata has pulled all of this together on his own, and that is a feat worth giving a try at least! There should be something here for those of you who feel that you need a bit of skate punk without the distractions of vocals, or if you’re just curious about proving me wrong!