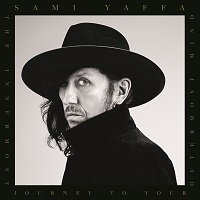 Sami Yaffa will be – well, most definitely should be – a name more than familiar to regular Über Rock readers, and especially those who not only have supported the site from the very beginning but also were part of the ethos for its establishment an amazing 12 years ago. But, for the uninitiated, a quick introduction: he was a founding member of one of the greatest glunk bands of all time, the mighty Hanoi Rocks, has remained a long-term collaborator with friend and frontman Michael Monroe and played a leading role in the renaissance of one of the genre’s most influential acts, the legendary New York Dolls. Now, some four decades into his storied career, he has released his first solo album, a collection of songs which he felt didn’t quite fit into the mould of his other projects but was nevertheless determined should be heard…

And that determination has defiantly paid off, as Yaffa has produced a collection of 11 songs that definitely should be heard by every self-respecting rock ‘n’ roll fan the length and breadth of the Uberverse – and by your unsuspecting neighbours as you crank that volume button up to maximum… and then some.

It has to be said that this beautifully titled album is one of contrasts which sees Yaffa drawing on myriad sounds and influences. Opener ‘Armageddon Together’ draws on dark Gothicism, while ‘Selling Me Shit’ lives up to its title, with its punky ferocity, brilliantly counterpointed by a ska-heavy mid-section breakdown before it explodes back into the life with the sort of acidity that would make Joe Strummer proud. ‘Fortunate One’ is a massive fist-pumping floor thumper characterized by a massive drum sound and the unmistakeable sax of a certain Mr Monroe, while ‘Rotten Roots’ evokes the spirit of ‘Sandinista’/’Combat Rock’-era Clash with its laconic Caribbean vibe: you can almost sense Strummer sitting, nodding appreciatively, in the corner of the studio, and ‘Germinator’ would quite comfortably sit in the middle of the new Wildhearts album, with its revived, spirited punk ‘n’ roll intensity and socio-political message.

Current single, ‘Down At St Joe’s’ resurrects the spirit of Tom Petty with a beautifully drawling vocal and an Americana vibe to the underlying, acoustic-driven groove, before Yaffa changes the mood again with the fuzzed out heavy blues of ‘I Can’t Stand It’, complete with a Rob Zombie-edged acidic vocal.

Sandwiched between two slices of glunk ‘n’ roll lasciviousness, the angrier-than-a-cornered-wasp ‘I Can’t Stand It’ and the catchier-than-C19 indie-infused groove of ‘The Last Time; is one of the album’s other surprising highlights, ‘You Gimme Fever’, which definitely will have you breaking out in a cold sweat with its Bayou-infused laconicism. ‘Look Ahead’ has a lurid Gogol Bordello/Gypsy Pistoleros-style gothic/gypsy folk groove, while closer ‘Cancel The End Of The World’ possesses a ‘Dark Side…’-era Floyd vibe (right down to the female backing vocals) combined with another reggae bass line: suitably, it’s also the album’s longest song, clocking in at three seconds over the six minute mark.

We may have had to wait 40 years or so for Mr Yaffa to step out into the spotlight in his own right, but, boy, has he hogged it in style, with an eclectic yet cohesive collection of songs that tick all the right boxes and will have even the most discerning of listeners not only reaching for that volume button but that marked repeat… repeatedly.