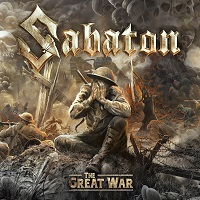 Not many bands can say that they have their own educational YouTube channel but Falun’s own Sabaton certainly can! The band, who are famed for their heavy metal historical storytelling, teamed up with established YouTube historian Indy Neidell to really delve into the stories of bravery and valour that inspired their songs.

This has not been the only way that the band have marked their 20th anniversary, however. This year will also see a return to Bloodstock Festival in the much-deserved Friday headline slot after a fantastic performance in 2015 that outshined the headliner, Trivium. Not only that but this December will see a special 10th anniversary of the Sabaton Cruise which will double in length to become a solid 48-hour event.

But perhaps most importantly, this year shows that 2016’s ‘The Last Stand’, and its supporting ‘The Last Tour’ certainly did not mean that Joakim Brodén and company would be slowing down anytime soon… Last Tour my ass! The band entered the studio on 11 November 2018, exactly 100 years after the end of the First World War, to spend three months recording their ninth album.

It may come as little surprise that ‘The Great War’ is entirely focused on the events of the First World War, which is not a new subject for Sabaton songs (let’s not forget ‘The Price of a Mile’). This builds a very strong concept for a band who have really nailed the art of the concept album in recent years, with albums about the Swedish Empire (‘Carolus Rex’), examples of individual’s bravery (Heroes) and famous last stands (‘The Last Stand’). Although the Great War was one of the darkest periods of human history, the guys manage to find some positive stories to balance out the bleakness of the war, a talent that is certainly becoming a hallmark of Sabaton albums.

The album is available in two distinct versions of the recording: there’s the Standard Edition and the History Edition (both available in a variety of formats, including the Great Box Deluxe Edition). Musically the two versions are near identical, however the History Edition adds an extra depth to the album with spoken word introductions that give context to the stories within each song. If you’re at all interested in the history behind the album (which, let’s face it, if you’re a Sabaton fan you probably are!) then I would recommend gunning for the History Edition. Or if you prefer your music without interruption then the Standard Edition is more likely to be what you want.

Right, let’s get this album spinning and see what we’ve got! Frontman Joakim Brodèn has been dropping some tantalising hints about this release; in fact, in a recent interview he commented “I don’t want to reveal too much, but the new longplayer kicks off with a curveball, making desired space into more distinguished, multilayered and melodically rich Sabaton metal lunacy”. So, let’s ride straight in with the first track, ‘The Future of Warfare.’

Those already familiar with Sabaton will know of the array of jokes about the band’s obsession with tanks (they have two tank drum risers called Audie and Murphy) and that is exactly what this song is about – the invention of the tank. Joakim was not kidding, this is certainly a little different, but I’m on board with this! The chorus is particularly unusual for a Sabaton song with the lyrics crammed into short, fast passages with lashings of choral samples (although the video for ‘The Great War’ suggests that they may have brought in a guest choir for this album). The History Edition of this track is perhaps even more epic than the standard edition as the spoken word section about the origin of the Tank really builds the suspense similar to the spoken word sections from ‘The Art of War’.

The next stand out track for me is ‘82nd All The Way’ which is an out and out classic Sabaton song. This is one of those songs that tries to pull out some positive from the bleakness of war, and focuses on an American soldier from Tennessee, Sgt. Alvin York of the 82nd Airborne Division. It tells the story of valiant charge led by Sgt. York on a German machine gun nest which resulted in the successful capture of over 100 German soldiers. This is a bouncing, fist-pump inducing anthem with some fantastic solo work from Chris Rörland and Tommy Johansson that is sure to be a crowd pleaser!

‘Devil Dogs’ has an absolutely bombastic introduction that doesn’t let up through the entire team. This song covers the late arrival of the USA to the First World War, and specifically the US Marines who seemed almost excited to dive into the fray. This track really showcases the rhythmic powerhouse of Sabaton, the combination of Pär Sundström and Hannes Van Dahl allows this song to gallop along at a terrifying pace.

Perhaps one of the most famous figures of the airborne conflict in the First World War, the second single from this album tells the story of ‘The Red Baron’. The Standard Edition of this track has an interesting creepy synth piece as the introduction that is unfortunately replaced by the spoken word section in the History Edition. Although the background music for the spoken word section is particularly epic so I would say it’s a fair substitution. ‘The Red Baron’ is a song that is guaranteed to get stuck in your head with its catchy chorus and I would expect to see this as part of the Bloodstock set!

Third single and title track, ‘The Great War’, revisits the topic of Passchendaele which was the focal point of ‘The Price of a Mile’ from the album ‘The Art of War’. The spoken word section on the History Edition poses the chilling question “what is so great about war anyway?’. Like the previous track, this is another particularly catchy song that will get stuck in your head, even if it’s just the words “Great War….Take More…Great Tour…Great Score….Encore” you’ll certainly be prepared for when this is inevitably played at their live show.

The album comes to a close with a choir’s particularly moving rendition of John McCrae’s wartime poem ‘In Flanders Fields.’ This was totally unexpected, but a completely fitting end to an emotional rollercoaster of a journey through The Great War as Flanders Fields were the ultimate resting place for the majority of soldiers who feel during the war, and it was upon these benefits that the poppies grew which became the symbol of remembrance.

This is yet another impressive release from Sabaton, they really do seem to continue to go from strength to strength. Considering the difficult and depressing topic of the tragedy of the First World War, this album manages to capture that sensation without it being overbearing. Sabaton have one again managed to do justice to those who fought, while also managing to find convey stories of those who managed to prevail against overwhelming odds. I particularly enjoyed that the History Edition even commented on the fallacy that the First World War was known as ‘The War to End All Wars’. With the strength of this album, it’s no surprise that, following their Bloodstock appearance in a few weeks’ time, Sabaton will be bringing their ‘Great Tour’ to Wembley Arena for their sole UK date on 8 February, which promises to be pretty spectacular!