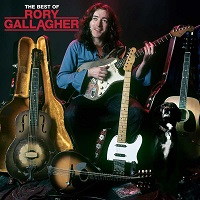 The first question that has to be asked about this double CD is, I suppose, “does the world really NEED another ‘Best Of Rory Gallagher’ compilation?” And, it has to be said, with hand on heart, that the initial answer is, most likely, “probably not”. After all, there are several such compilations out there, although it could be argued that not one of them is definitive – after all, ventures such as this are very much subjective to the view and feelings of the people responsible for putting together the track listings. Equally, it is very hard, if not virtually impossible, for such releases to bring anything new to the table, as it were, despite the extensive canon of work that the Irish guitarist left behind…

This latest exploration of the G Man’s back catalogue does serve up something “new”, in the shape of a previously unreleased – well, until it was issued as a limited edition 7” single earlier this month – 1973 collaboration with Jerry Lee Lewis on a cover of the Stones’ ‘(I Can’t Get No) Satisfaction’. Otherwise, it is a collection of 30 tracks that covers Gallagher’s complete discography, from his first arrival on the scene with Taste to his final departure from it three decades later, making it a self-contained to other recent explorations of his back catalogue, including the recent, aptly named, ‘Check Shirt Wizard’ live album and last year’s extrapolation of his love of the ‘Blues’.

I mentioned the word “definitive” in my opening paragraph, and it could be argued that this compilation comes as close to fitting that descriptive as it is possible to get, possessing as it does a tracklist that will tick most if not all of the boxes for all but the pickiest of Gallagher fans. It is a testament to the wealth of Gallagher’s talent, and his prodigious work-rate, that only two albums, ‘Tattoo’ and ‘Calling Card’, are featured more than twice, But, it is a tracklist that, as intimated, most casual Rory fans and purists alike will already possess, quite possibly in myriad formats (I know I certainly do). It does, have the attraction of pulling together some of his finest, and most fondly remembered, moments, into one package. Of course, there will be particular personal favourites which are admitted (I can personally count ‘Out On The Western Plain’ and ‘Secret Agent’ among my own list of glaring omissions), but it is pleasing to see a few “surprise” inclusions, such as ‘Just The Smile’ from his solo debut and ‘Cruise On Out’ from ‘Photo Finish’, while the eight-minute workout of ‘Ghost Blues’ proves that, even in what proved to be the latter part of his recording career, the G Man still knew how to wring every ounce of passion out his battered oul’ Stratocaster.

So, to go back to my original question: does the world really need yet another ‘Best Of Rory Gallagher’ compilation? Well, upon further reflection, my verdict is this: as a way of reminding us of the Cork man’s consummate talent, and hopefully introducing a new generation of fans brought up on so much fakery and new wave blues by numbers, then, yes it does… and this is possibly as career-defining and spanning collection as you’re likely to get – at least outside of simply playing every single one of his albums back-to-back… Mmm, now there’s an idea for next weekend…