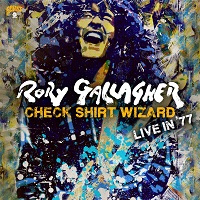 Like many of my fellow teenagers growing up in the Troubles-ravaged Northern Ireland of the late 1970s and early 1980s, music was my escape from the mayhem going on around me. It was one of the few uniting forces, bringing together people from different backgrounds who didn’t really care who the other person was, where they came from or what foot they kicked with, just who were their favourite bands and artists. It was one of the few reliable constants in our lives – as were the regular visits by the man who was the closest thing the island of Ireland came to a genuine “rock god”, Rory Gallagher, who never failed to brave the bombs and the bullets to entertain the fans on this side of the border on an annual basis.

The ‘G Man’, as he is affectionately remembered, even a quarter of a century after his untimely death, was always at his most powerful live, as this latest collection of recently unearthed recordings emphasizes. Now, regular ÜR readers will know that I’m not generally a fan of live albums, as they often fail to capture the true sense of the occasion, largely due to the amount of studio trickery employed during the post-recording pre-release phase. However, the one exception to my rule has always been Rory Gallagher’s live albums which, while not quite matching the sheer exhilaration of seeing the man up close and personal, have nevertheless always managed to encapsulate the sheer raw, visceral nature of his performances.

As the album title suggests, these recordings date from the 1977 ‘Calling Card’ tour, which saw Gallagher playing 14 dates, covering the entire length of the country, from Aberdeen to Brighton, in January of that year. This double CD/triple LP set features a total of 20 songs culled from four of these shows (London, Brighton, Sheffield and Newcastle Upon Tyne), dusted down and given just the smallest smidgeon of 21st Century varnish to mark the 25th anniversary of the Cork guitarist’s death.

One thing that immediately strikes is the care that has been taken with the running order of the tracks. Although, as mentioned, the recordings have been culled from four different gigs, the running order is cohesive, and echoes what would have been an actual Gallagher setlist on any of the given nights. So, while the recordings traverse both geography and dates, you are left with feeling that you are listening to a single recording, captured on one night of what was one of his most iconic tours.

And, as with all of the G Man’s previous live recordings, there has been very little fiddling: just a lick of modern production paint here and there, with the result that you also have the feeling that you are right there, in the front row, as he and the band do what they do best, and that is deliver some of the best damn blues rock you will ever hear. The other result is an album that captures the timeless nature of Gallagher’s music, in a way that is acutely aware of his legacy and the memories those of us lucky enough to have witnessed him live remember with fondness.