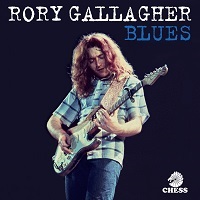 In the history of Irish music, there are a handful of people whose names, years, decades and even centuries after their passing, are still uttered in hushed reverence. From Dr James McDonnell to Count John McCormick, Josef Locke to Derek Bell, their names, and their legacies, continue to echo down through the ages. In the field of rock ‘n’ roll, of course, we have the likes of the incomparable Phil Lynott and Belfast’s own prodigal son, Gary Moore. But, head and shoulders above them all stands the man still regarded as the greatest interpreter of the blues of his generation, and perhaps the greatest non-American to pick up a battered Stratocaster and make the genre his own. We are talking, of course, about The G Man, the legend that is the Cork-born genius Mr Rory Gallagher…

At the time of his untimely death, at the age of just 47, in June 1995, the G Man left behind an amazing legacy of 11 studio and three live albums, plus two studio and two live albums with his band Taste, alongside innumerable collaborations with artists as diverse as Jerry Lee Lewis and Muddy Waters to Irish folk innovators The Chieftains. He was also a man with a determined sense of his own identity, turning down opportunities to join The Rolling Stones and Deep Purple to plough his own furrow. Inevitably, he also left behind a virtual museum full of unused recordings – discarded demos and jams, unreleased live sessions and much, much more, all carefully collected and curated by his brother Donal.

Now, in what would have been his 50th anniversary year as a recording artist, comes this timely collection, released in a variety of formats from a single (and, tbh, worthless due to its paucity) to the totally essential purchase that is the full-blown deluxe three CD boxset, as well as two limited edition blue vinyl LPs, covering the entire gamut of his love of the blues, from acoustic and electric sessions to unearthed live performances, as well as rare radio and TV broadcasts thought long lost in the vaults of time but lovingly held on to and resurrected by his ever so protective state.

Both the ‘Electric’ and ‘Acoustic’ CDs on the deluxe set feature career-spanning out-takes from many of Rory’s albums, including the sessions for ‘Deuce’, ‘Blueprint’, ‘Tattoo’, ‘Against The Grain’ and ‘Jinx’. For true Rory lovers, one of the main attractions of the former set is the inclusion of one of Rory’s last ever recordings, ‘Leaving Town Blues’, recorded just a few months before his death for the Peter Green tribute album ‘Rattlesnake Guitar’.

The third CD demonstrates the power of Rory in his favourite environment – the live arena, with previously unreleased tracks from when he was arguably at the height of powers, his 1977 and 1982 tours. There also is his amazing ten-minute jammed-out interpretation of Bo Carter’s ‘All Around Man’ from his infamous 1976 ‘Old Grey Whistle Test’ special, which still stands the test of time as one of the powerful TV sessions ever committed to film:

All in all, ‘Blues’ is a timely reminder of both Gallagher’s genius in interpreting the blues and his genuine love of the music. It contains some historic moments in the history of the genre, but above all it is a reflection of the humility of a man who played from his heart and soul and for no other purpose than because he just loved doing so. An essential purpose for not only fans of the G Man but any genuine lover of the blues, and a fitting reminder of his continuing legacy.