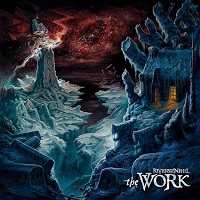 Where to start with these guys? Rivers of Nihil caused quite a stir with their last effort, ‘Where The Owls Know My Name’ showcasing a psychedelic approach to death metal accompanied with dreamy sax interludes throughout. Their latest album, ‘The Work’, was put together over some incredibly difficult times throughout 2020 and 2021 during the Covid pandemic. This sort of album was definitely going to be a difficult one, not just for the difficulties in logistics, but also how do you follow up an album that was regarded as one of the best death metal albums that’s been put out in years?

‘The Work’ definitely represents a departure from ‘Owls’, rather than having a focus on Sax being an integral part of the overall songwriting, it’s still there but used rather for layering and texturing the songs for example but not just this, the overall sound of the album is much more spread out.

To give you a bit of an idea you’ll find some songs such as ‘Focus’ and ‘Dreaming Black Clockwork’ are definitely Death Metal as you would recognise it, staggeringly huge filthy riffs that fuel moshpits and headbangers around the world but then there’s songs that are a very big change of pace such as ‘Wait’ which has an epic crescendo and wailing guitar solo to boot.

‘Clean’ certainly stands out a lot to me, one of the singles they’ve released in the run up to the release of ‘The Work’. I could talk so much about this song, it’s absolutely bloody fantastic, just because of the fact it’s got an extended keyboard synth solo in it that evokes the ghost of Pink Floyd’s Rick Wright – not totally sure if that was intended but they really nailed his signature sound and style with it.

If you’re still wanting a sign that Rivers still want to get some solid sax in there, give ‘The Void From Which No Sound Escapes’ a listen, you won’t be disappointed. It still strikes me as odd with how well Rivers manages to get sax to work with their signature crushing riffs and guttural uncleans – it’s a little bit less psychedelic in it’s use than some of the dreamy segments from ‘Owls’ but don’t let that undersell it.

It’s somewhat hard to place this as just a death metal album, because I really feel like it’s not on the whole. I mean towards the end you have ‘Episode’ which is a straight up discordant banger with probably one of the finest guitar solos that Rivers have ever done and then this gets followed up with ‘Maybe One Day’, a more acoustic based ballad that actually wouldn’t sound out of place on Devin Townsend’s ‘Ghost’ album.

‘Maybe One Day’ on first listen actually felt like the end of the album to me, but I was mistaken, this album gets wrapped up by the 11 and a half minute long epic, ‘Terrestria IV: Work’. The final track on this album does an absolutely fantastic job of wrapping it up by feeling like it’s taking the facets of each track on the album and putting them all side by side in one final massive send off.

So how do you follow up an album like ‘Owls’ when you set the bar so high?

Well, if Rivers are anything to go by – the bar doesn’t matter, you take the lessons and experiences learned from crafting such an album and you use them to craft something that feels like a maturation. A class act.