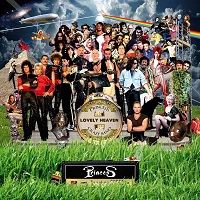 The first thing you notice about this album (well, as you do with many) is its distinctive artwork, which is an homage to ‘Sgt Pepper…’, with the band members featured in a midst of a montage of various rockers and other stars, from Ozzy Osbourne to Marilyn Monroe, Gene Simmons to Bruce Springsteen.

As for the music? Well, PrincesS – trying sticking that into a search engine – is the brainchild of singer Freddie Wolf and bassist Orlando Monteforte in order to explore their love of Seventies classic rock.

And they certainly succeed in doing that, as ‘Lovely Heaven…’ is an album very much rooted in that era, with the only nod to modernity being the production techniques. And the latter is part of the problem with this album, as it is over-produced, from the layered vocals and guitars (yes, I know such techniques have been used in the past, but a whole choir featuring the same singer – give me a break)  to the overly precise clarity of the final mix. A wee bit of mud on the boots would have added a touch more authenticity to the retro vibe.

It’s also a mishmash of musical styles, even including a corny faux Lloyd-Weber style duet and a “metalled-up” Bronski Beat cover (seriously, wtf?).

The standout performance is that of guitarist Max Brodoline, who can shred and wank off with equal aplomb,, producing some fast and furious fretwork when he is allowed to poke his axe through the vocal-heavy mix. As for Monteforte’s bass work? It’s mostly so inaudible that I’d be reviewing that partnership agreement.

Putting aside the fact that English is not their first language, the lyrics are consistently twee, while Wolf’s very obvious fanboy obsession with Freddie Mercury, whom he seeks to emulate in every note, just does not suit the heavier moments, which is where the album actually truly shines.