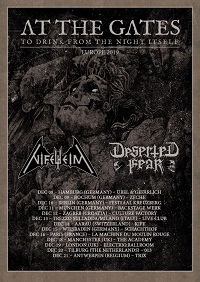 Going a touch heavier than I’ve been for a bit, a three-band death metal gig, headlined by Swedish melodeath progenitors At The Gates, in one of only two UK shows on this particular tour. It’s back to the same building as my previous gig in Mark Lanegan, albeit in a different room of the venue, for an evening of whiplash inducing headbanging and some pretty heavy fucking metal!

First on are At The Gates’ label mates Deserted Fear, a German melodeath act that have been the same core three piece since its formation 12 years ago, with a touring bassist and this familiarity shows through quite quickly. While there are only maybe 15 people in the room as they take to the stage, this growd to several times this during the set, though, to their credit, the performance level is strong from the very off and doesn’t waver in either direction.

There is a tightness that comes from the aforementioned familiarity that shows how well rehearsed they are, with Simon’s driving drums ushering the rest on without mercy. The vocals are gutteral yet intelligible, with well matched guitar parts echoing and duelling each other through the set, leaving almost every head in the room, old or young, nodding away in an echo of the drumming. Finishing on ‘Bury Your Dead’ from debut full length ‘My Empire’, they give a well worked, highly enioyable set that garners plenty of appreciation from the growing crowd at the end of their set.

In what is quite a treat, roots black metal icons Nifelheim are our main support for the evening and it’s great to see they are bang on form, with the burgeoning room taking to them quite well. Bedecked in studs and spikes, their own roots and influences are quite clear, with even new song, ‘The Burning Warpath To Hell’, from a forthcoming 7”, having Judas Priest like guitar episodes and the cheers and chanting show that even the new material is as appreciated as that aged closer to the almost 30 years they have been a group.

Despite using some vocal effects, the lyrics can still be made out at times and the musicianship harks back to the days when it was about technical ability rather than just a wall of noise or blastbeats, showing good levels of skill whenever any gets the opportunity to show off a touch. Their old school style goes down well even with a melodeath crowd, which is another good indicator of quite how well they do in a live setting still. It’s a 45-minute set packed full of heavy, heavy riffs, lots of ability and lots of crowd chanting that finishes on ‘Possessed By Evil’, from 1995’s self-titled opus ‘Nifelheim’. The bar has been raised further still for At The Gates.

And so begin the mosh pits to the barons of brutality, At The Gates, before they can even really get into their stride, as the energy from the crowd lifts still more. The room is looking full and from the outset it’s clear that the band are as up for it as the audience have already shown themselves to be. While the entrance music of ‘The Muppet Show Theme’ may be rather tongue in cheek, there is nothing about their music that the band do not take seriously, including putting on a hell of a show, with the lights well worked and timed to add something further into the live act than we have had so far tonight. The melodic parts flow well into and from the rather heavier and frenetic riffing that keeps appearing from the very able guitarists, with some quite angry string plucking from Jonas on bass keeps the pace set to full throttle.

The title track to last year’s release ‘To Drink From The Night Itself’ opens up the set to loud acclaim, while the solos in the likes of ‘The Colours Of The Beast’ make for great melodic rest points, which in turn emphasises the heavier end of their music even more so. Tomas and co are smack on form – they have to be after the strong showing from both the support acts – and it shows that they are definitely being pushed into top form, as the ever nodding heads around the room, save the mosh pit itself, attest to. ‘Under A Serpent Sun’, ‘Daggers Of Black Haze’ and ‘Heroes and Tombs’ make for very nice set additions as we get on towards the end of the set and it’s clear how At The Gates both garnered and have kept their reputation as one of the must see death metal bands, when they’re in such a rich vein of form as they are currently in. There’s nothing showy, no fucking around, just pure, old school, melodic death played in a vicious manner to some crazy fans, just the way it should be.