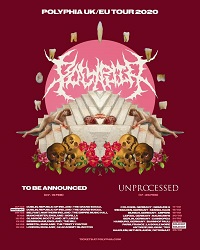 Unfortunately, due to the wonderful weather we had in Scotland the week of this gig, getting to the venue was a struggle, so getting to there in time for the support slots wasn’t possible despite my vigorous attempts. From what I had heard, though, both of the supports, Unprocessed and Tides Of Man, they put on great shows that the crowd were able to enjoy a lot.

As for Polyphia, the moment they came onto the stage the audience was hyped and immediately started to sing along to the guitar riffs which they carried out for every song. The second song of the set was ‘O.D.’ which had the audience moshing and screaming about the place and then the first crowd surfers began but it was no surprise for people which had been to a Polyphia show before as their shows can get quite intense. Thankfully, despite the intensity of the audience throughout the show, everyone within the audience was very caring and helpful towards anyone which had fallen, been injured or needed help whilst in the pit which the band noticed and were very glad about as guitarist Scott LePage would often smile at the sight.

The energy within the room was incredibly intense and the band didn’t fault at all, bassist Clay Gober and Scott would swap between introducing songs and hyping the crowd up whilst the bands other guitarist, Tim Henson, mostly stood quietly but speaking through every note which he played almost effortlessly on guitar. There was such a beauty between the combination of every instrument on the stage and the way they all blended into one another, making the audience jump and sing without words needing to be sung within the band’s songs. There were multiple moments within the bands set where the crowd knew there was going to be sick drops throughout the songs which almost always resulted in a big circular space opening on the floor for people to then start a pit when the drop happened. At one point in the set where the pit had opened up there had been a series of people entering the space within the floor and showing off before the drop came in the song.

Polyphia is certainly one of the most intense shows you can go to especially for the crowd as it is almost constant crowd surfing and jumping all throughout the set. The bands musicianship and the way the songs were written meant that the band didn’t really need to interact with the crowd in order to make them to do anything, it was almost an unspoken vow of knowledge and partnership. There was a good bit of movement around the stage from both Scott and Clay whilst Tim for the most part stayed in one place laying out the sweet riffs to the audience. Drummer Clay Aeschlimen was incredible to watch as he powered through every song which must have been a task that isn’t easy at all especially with a lot of the fills which he carries out.

Overall, the Polyphia set was a very entertaining display of musicianship as well as crowd interaction, that shouldn’t be missed. Especially if you missed the self-proclaimed ‘not only biggest, but also the best metal band in the world’ this time around.