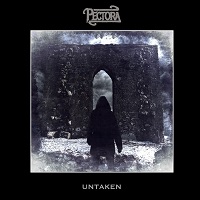 Since their formation in 2013, Danish five-piece Pectora have been producing a hard hitting brand of heavy metal. ‘Untaken’ represents the band’s debut album following two previous ep releases, 2014’s ‘Burgeon of Hate’ and ‘Redemption’ in 2017. They’re looking to bring their brand of metal to a wider audience with an upcoming tour in support of the new record. They’ve earned a strong fanbase and critical acclaim with what they have produced so far, can ‘Untaken’ enable Pectora to break through to a wider market and what do they have in store over the eight tracks?

The title track kicks things off and it’s apparent from the get go where Pectora are drawing their main influences. The galloping riffs and rhythms owe much to the early NWOBHM stylings. This is coupled with a chopped aggression, typical of the early eighties thrash scene. They’ve blended the concepts well, enabling the track to maintain an attacking drive with a catchy hook pulling the listener in. Singer Kenneth Steen Jacobsen channels his inner James Hetfield for the vocal delivery, it matches the music well even if the listener does half expect a Hetfield ‘Yeah’ to punctuate the chorus lines.  More is made of the traditional metal sound that Pectora encapsulate with ‘Collide’. Once again, the musical charge is led by galloping guitar riffs coupled with a driving foundation from the bass and drums. The twin guitars duel the lead melody lines in a Judas Priest like fashion and serve to develop the hook lines upon which the vocal melody is laid on top. With its relentless groove and well-crafted duel guitar solo, ‘Collide’ represents one of the stand out moments on the album.

There’s no real deviation from the traditional metal style, but that’s not to say that the album is boring or stagnant after the opening tracks. Tracks like ‘The Fare’ and ‘Unkindled Flame’ engage the listener with the blistering guitar work and powerful drum and bass work. It’s a straight shot of heavy metal but very well executed. ‘No Regrets’ opens with a simple bass line that is then built upon with the guitars and when the full band kicks in it becomes the main hook. The layering draws in the listener and as the song grows into a powerhouse foot stomper the listener can’t help but go with it.

It’s a well-mixed and produced album which allows for the band to showcase their talent as musicians and songwriters. The vocals are clear and sharp but don’t stand alone from the other instrumentation. The guitars are clear in their delivery, allowing the listener to pick out the twin lead lines and follow the riffs and melodies created. All the while the powerhouse rhythm section has an underlying rumble upon which the remaining texture is layered. It’s a very well-balanced delivery through every track.

Those looking to find fault with what’s on offer might suggest that some of the ideas and themes delivered don’t deviate much from bands that have gone before. Not to say that Pectora have copied bands such as Maiden, Priest or Metallica in a plagiarism sense. It’s that some of the hooks, riffs and song structures don’t have much sense of originality. However, the band have developed a solid sense of self identity over these eight tracks. Yes, their influences are at times more obvious to hear on certain tracks, but so what. They’ve harnessed an inspired sound style in the vain of traditional heavy metal and turned it into something that is their own.  Ultimately what Pectora have created with ‘Untaken’ is a great debut album. It provides a solid wall of heavy metal from start to finish over eight tracks that will certainly get notice for the band. The music on offer is extremely entertaining, it may not set the world alight, but it will most definitely raise a few fists in the air and get some heads banging.