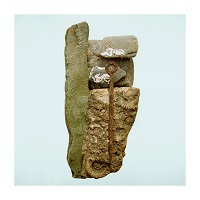 It has to be admitted that there are times when the city of Belfast stinks. Absolutely feckin’ reeks. Walking through its now deserted streets late at night, you often cannot fail to detect the stench emanating from below your feet. It’s the aroma of the ancient sleech beds on which the city is built, and which continue to make their presence known, despite the best endeavours of modern technology to eliminate the unmistakeable odour of putrefaction and decay upon which we tread each and every day. And it is from these sleech beds that Nomadic Rituals crawled some eight years ago, bringing their own brand of putrefying sonic stench into the dark light – and have done so once more with this, their third full-length album.

With its six tracks clocking in at just shy of a huge 46 minutes, ‘Tides’ certainly lives up to its name, as it is a tsunami of sonic brutality: dense and broiling, moribund and depraved, and as mesmerising and hypnotic as the trio’s all-too-rare (even before the beerbug pandemic) live shows. This is an album that reaches deep into that Belfast sleech, joyously scoops it from the unhallowed ground, smears it all over itself and then gleefully flings it your direction, smearing you from head to foot in its dank fetidity, sucking you inexorably into its nightmarish embrace with the inexorable result of a White Walker casting his gaze deep into your doomed heart.

Like its title, the album ebbs and flows with a natural alacrity and ease, alternating between long drawn-out passages of subliminally enervating instrumentation and bursts of evocative energy: Craig Carson’s dense rumbling bass mixes seamlessly with Peter Hunter’s downtuned baritone guitar miens, creating a dark entity that is as whole as it is unwholesome, while Mark Smyth has that consummate knack which makes a great sludge/doom drummer, by placing the emphasis on what is omitted rather than included.

‘Tides’ is a gargantuan, gigantic album in every department. I’m not just saying this because they’re from my home town, as bands here know I am their fiercest critic (just ask a few of the others I have reviewed in these pages over the years). Nomadic Rituals have succeeded in delivering a defining moment in sludge/doom’s generic timeline, and one which will stand proudly alongside anything produced by more famed proponents, who should well be looking over their shoulders and seriously considering their places on the (iron) throne of the mien.