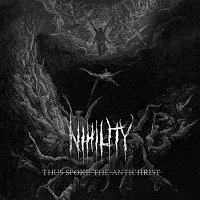 In the mood for something oppressively dark now that summer’s knocking at the door? You could do a lot worse than ‘Thus Spoke The Antichrist.’ These eight fiendish cuts are a gift from Nihility, a Portuguese five-piece specialising in fearsome heaviness and this debut is pit-igniting metal at its most pox-ridden. They’ve occasionally been referred to as a black metal act but they’ve more in common with the likes of Cannibal Corpse and Aborted than Watain or Darkthrone.

In fact, with their emphasis on slamming riffs and rabidly fast Satanic machismo, they wouldn’t be out of place sharing bills with bands like Ingested either. ‘Thus Spoke The Antichrist’ is a grim, torturous and monolithically heavy album, but it’s not entirely po-faced and it’s hard to imagine them getting upset by stage-divers “spoiling the vibe.”

Take ‘Spirit Of Contempt’ for example. It’s a gravel-voiced and rabid monster, but there’s only a faint trace of frostbitten depravity about it. It’s a track that’s designed to inspire circle pits rather than wrist-slashing and there’s even a brief moment where it comes close to transitioning into fist-swinging hardcore. Take a listen to that down-tempo almost-breakdown in the closing third and try to argue Despised Icon have never written anything similar.

‘Indulgent Self Restraint’ and ‘Organic Fallacies’ meanwhile are high speed/low register cuts precision engineered to trigger violence. There are some delicious black-thrash riffs to be found here, alongside more pulverising power chords and glass-gurgling roars. Thanks to some unnerving tremolo work, ‘Shallow Ataraxia’ is perhaps their most “tr00” moment, while the title track is a bloody-knuckled uppercut to the jaw. It’s angry and antagonistic stuff, but if it weren’t the occasional moment of foreboding, it’d be right at home on a Fit For An Autopsy record.

It’s also worth noting that they don’t hang around either; Nihility don’t waste time with extensive intros or soundbites, they cut straight to the brutality and are a to-the-point gang of headbangers. This refusal to drag things out extends to the entire album, not a single song reaches five minutes and the whole thing is wrapped up nicely in exactly half an hour. Theoretically speaking, they could play the whole record in a single support slot.

So yes, while they’re definitely aware of the blaze in the northern sky and their logo might be difficult to read, Nihility are more fun than you’d expect. They’re Behemoth with a larger hardcore collection and come across like a beefed up, macho take on extremity. Burn churches and kill one another? Hell no, let’s sink a few beers and see if there’s an after-show party on. How much can you bench Bartzabel?